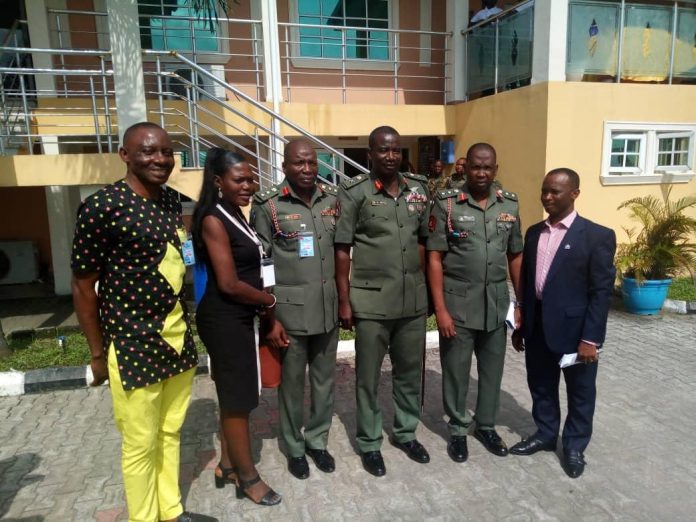 The Chief of Army Staff, (COAS) Lt Gen Tukur Buratai on Monday emphasised the need to harness the gains of inter-agency cooperation by the  Armed Forces, other security agencies and the media to tackle criminality, noting that it has assisted in achieving huge successes in military operations.
He was speaking as the Special Guest of Honour at the Nigerian Army School of Public Relations and Information (NASPRI) annual Media Workshop held at the 81 Division Officers’ Mess, Marina, Lagos.
Represented by the General Officer Commanding (GOC), 81 Division, Major General Olubunmi Irefin, explained that the theme of the Media Workshop: “Inter-Agencies Cooperation: Roles of Public Relations Officers” couldn’t have come at a better time considering that the nation is currently prosecuting a war against insurgency and terrorism, militancy, kidnapping, herders/farmers clashes and other forms of criminality which requires a high degree of coordinated efforts and synergy among security agencies.
Emphasising the need to intensify cooperation and collaboration, the COAS added, “Through effective synergy amongst the military and other Security agencies included the media, we have effectively prosecuted many joint operations with huge success.
He reiterated that “Though there are challenges which are not peculiar to our country,” added that through effective collaboration, we can create a peaceful environment where law abiding citizens can go about their lawful businesses without fear or intimidation which is our collective goal.
However, Gen Buratai implored all the participants to make effective use of the knowledge and ideas gained from the conference in ensuring that all forms of criminal activities that constitute a threat to   our national cohesion are stamped out not only through tactical means, but with effective information maneuver across board.
On his part, the Acting Director, Army Public Relations, (DAPR) Colonel Sagir Musa in a keynote remarks noted that the training workshop was apt considering that the Nigerian Army and other security agencies are effectively and successfully clearing the remnants of the crouching Boko Haram/Islamic States West African Province; criminals and marauders in the country.
“The menace of fake news, sourceless news, deliberate misinformation compounded with unregulated, free willing social media is increasingly becoming of great concern to well meaning Nigerians especially to Military Commanders where one fake news can dampen the morale of troops in the battle field with the attendant negative consequences to the nation, her citizens and vital interest,” said Musa.
Also, the Acting Commandant, Nigerian Army School of Public Relations and Information (NASPRI), Colonel Mustapha Anka, in his opening address emphasised that the training window was “aimed at developing our capacity on the job and broaden our horizon which is in consonance with the Chief of Army Staff (COAS) Lt Gen Tukur Yusuf Buratai’s training and retraining of officers and men in order to professionally discharge their constitutional roles.
He noted that the theme for  this year’s lecture: Inter Agency Cooperation in Nigeria: Roles of Public Relations Officers,” was carefully selected to discuss and trash the dreadful trend of inter agency clashes and unnecessary rivalry among security agencies.
Col Anka explained that “You will agree with me that the unhealthy trend has become an issue of national concern and indeed need to be addressed in order to guide against its threat to national security of our dear country and enhance espirit de corps.
“This avenue will surely provide a platform that will effectively enable us synergize in the areas of objective media reportage bearing in mind promoting national interest, peace and security. We must collectively and patriotically see ourselves as vanguard for the enthronement of ideals that will elicit public interest in nation building.
The media workshop is an annual lecture organised by NASPRI to discuss contemporary security issues with a view to managing strategy information as it affects the army, information officers and the media.
It was gathered that since its establishment in April 2010, NASPRI has trained 356 officers and 2,472 soldiers/equivalents in the Armed Forces.
The weeklong training is being attended by members of the Armed Forces, Police, Nigeria Security and Civil Defence Corps, Immigration Service, Lagos Neighbourhood Security Corps and civilians from cooperate institutions and the media.