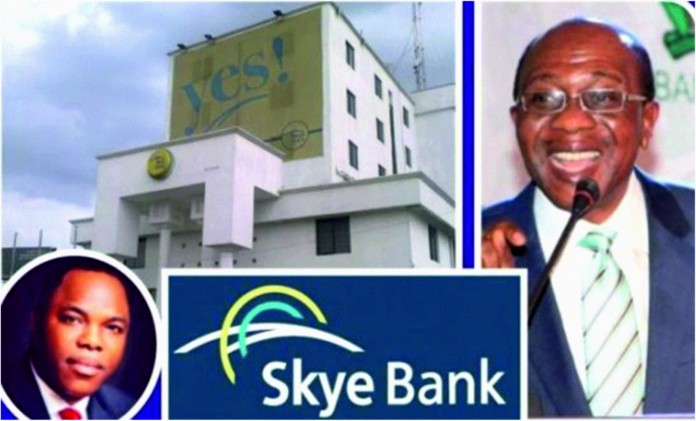 …assures depositors of their funds

THE Central Bank of Nigeria is in a desperate move to forestall total breakdown of operation at Skye Bank as many customers have been inundated with series of false information that the bank has been liquidated.

Confronted with a panic withdrawal after CBN changed the management last July, the apex bank provided a loan facility to the bank to boost its liquidity to avoid a liquidity shortage.

The short-term lending facility will allow the new management to “ensure that some withdrawals it suffered do not adversely affect its operations,” Isaac Okorafor, a spokesman for the CBN, disclosed recently.

Recall that an online news platform had reported sometimes ago that the apex bank had discreetly worked on stress tests in which at least nine commercial banks, including Skye have demonstrated a level of distress that required that they recapitalize to avert their falling into distress.

But the CBN had come out to refute the allegation just as it is coming hard on the latest allegation. Meanwhile months after what the online platform said would happen eventually happen to Skye Bank.

The apex assured customers and stakeholders of the Skye Bank and other banks in Nigeria that none of the banks in the country is distressed, adding that they all remain strong and viable.

In its latest defense of the bank, CBN in a statement signed by its acting Director of Corporate Communications, Isaac Okoroafor, said the bank is not in distress and remains a healthy bank in the Nigerian banking system.

“The health of the Nigerian banking system remains strong. All banks in Nigeria are safe and depositors have no cause to fear over their deposits,” he said.

The CBN stated in the statement that it has not liquidated Skye Bank or any other Deposit Money Bank for that matter, saying that Skye Bank only had a corporate governance challenges which had been resolved.

Meanwhile, the CBN-appointed Chairman, Mohammed Ahmad also has assured customers and stakeholders that the reconstitution of the board of the bank was not a takeover but an intervention to correct observed corporate governance issues under the old board.

Ahmad, who made the clarification while addressing shareholders on the Lagos floor of the Nigerian Stock Exchange (NSE) where the new board of the bank had gone to provide information on recent developments in the bank, said the ownership of the bank remains in the hands of the shareholders, adding that CBN does not own the bank and has not taken over the bank.

Ahmad, a former Director General of the National Pension Commission (PENCOM), re-assured the bank’s customers and investors that the bank was not distressed but only had corporate governance issues under the old board. He said the bank’s fundamentals remain strong and that it remains one of Nigeria’s leading and retail banks.

In his remarks on the occasion, the new Group Managing Director/Chief Executive Officer of the bank, Mr. TokunboAbiru, said the management team and the board would work to achieve value enhancement for shareholders, customers and other stakeholders by bringing the cost-income ratio to acceptable levels, improving the risk assets quality and working towards increasing the liquidity and capital adequacy of the bank.

Abiru described the reconstitution of the bank’s board as an intervention and not a takeover by the CBN, saying the lender’s fundamentals are good and strong.