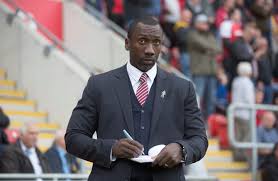 CHELSEA icon Jimmy Floyd Hasselbaink was clearly unimpressed by the young Blues side in recent 1-1 draw with Bohemians.

The club legend fears some of the starlets might not have what it takes to succeed at Stamford Bridge.

Frank Lampard, 41, gave a chance to a number of Chelsea kids, with Marc Guehi, Dujon Sterling and Conor Gallagher all starting in Dublin yesterday.

But according to former striker Hasselbaink, 47, some of the youngsters were not up to the task.

Hasselbaink said: “They lost the ball way too easy.

“Players were having too many touches, sometimes seven, eight touches and it slows the game down.

“It will be a lesson for Frank to see players and in a way it will make his mind up.

“Moving the ball fast is his idea of how he wants to play the game. The majority of successful teams do move the ball quickly.

“We saw today, especially in the second half, certain players were dwelling a little bit too much on the ball.

“They didn’t have a solution before they had the ball.

“For some it might be a little too much. That is for Frank to figure out, who those players are and who he will go further with.”