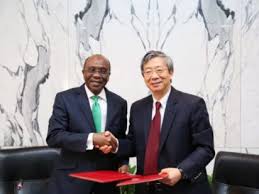 Share this on WhatsApp
Spread the love
Financial experts have argued that the recent $2.5bn currency swap deal between and Nigeria and China will stifle the Nigerian economy in the long run.
Recall that two weeks ago, the Central Bank of Nigeria (CBN) had announced the successful completion of $2.5bn currency swap deal with the People’s Bank of China (PBoC).
The transaction, according to the CBN is aimed at providing adequate local currency liquidity for Nigerian and Chinese industrialists and other businesses in order to reduce their difficulties in the search for a third currency.
Reacting to the deal, Mr. Boniface Okesie, the President Progressive Shareholders Association of Nigeria said that the currency swap deal was unnecessary, adding that the deal would ensure that majority of the country’s foreign trade deals were channeled to the Chinese economy.
“This will lead to economic dependence despite that Nigeria is a sovereign nation. The policy will lead to the influx of Chinese goods into our country considering that we are contending with weak regulation,” he said.
Similarly, Dr. Austin Nwaeze, a lecturer in the Department of Economics, Pan Atlantic University, Ibeju-Lekki, Lagos told NAN that the deal was only good on its surface value.
He noted that in the long run, the initiative would allow the Chinese to compete with our local businesses, thereby, impeding the growth of indigenous firms.
Nwaeze said the only benefit of the currency swap deal for Nigeria was that in the short run, it would address third-party sourcing of the Chinese currency by Nigerian importers.
“However, it will take the trade deals with the Chinese to a new height and reduce the pressures of our foreign exchange,” he said.

Share this on WhatsApp
Related Topics:ChinaCurrency swap deal
Up Next