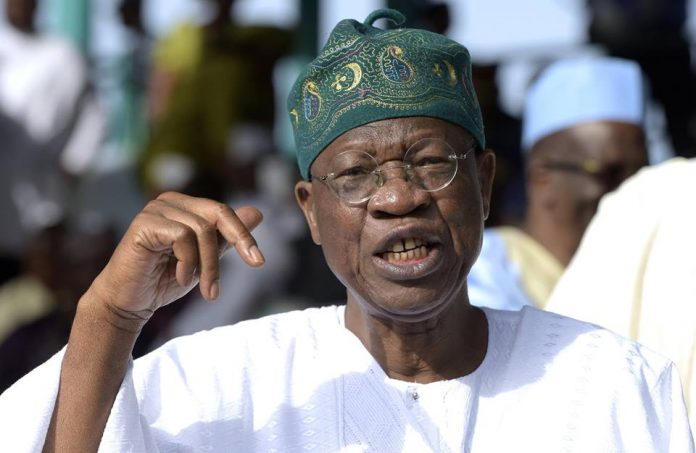 Civil Servants in the Ministry of Information and Culture have risen against the presiding Minister, Alhaji Lai Mohammed, accusing him of negligence of staff welfare and fraud, demanding his removal. They were, however, not specific on the amount of funds alleged
to have been misappropriated.
The civil servants were gathered to have embarked on mass   protest over what they described as “the ministry’s negligence of staff welfare and gross misappropriation of public funds.”
The workers had requested President Muhammadu Buhari to order the investigation of the activities of the ministry over non-payment of allowances, refusal to train staff, among others.
ALSO SEE: Governor locks out SSG, Govt House Staff over lateness
The protesters, who chanted songs of solidarity, blocked the entrance gate of the ministry, complaining that they were compelled to work under poor conditions, delay of promotion arrears, non-payment of repatriation allowances and selective training of staff.
The Chairman of the Association of Senior Civil Servants, Information Chapter, Adam Ogwola, was gathered to have highlighted the many challenges the civil servants in the ministry have to contend with in the performance of their duties, adding that they are in an environment that is ‘unreceptive’.
Meanwhile, Information and Culture Minister, Lai Mohammed, was said to have remarked that with inadequate resources, there is a limit the federal government can do on workers’ welfare.
Lai had said this in response to the protest by the unions in his ministry, demanding his removal for allegedly not addressing issues bordering on their welfare.
The minister had contested that it was impossible for the government to address and meet the workers’ demands owing to paucity of funds.
“It is not unusual for unions to call for the removal of ministers. Any minister should expect that. They are complaining about welfare but there is a limit to what government can do within the available resources.
“As much as we sympathise with them on the situation, the economy is simply not healthy enough to accommodate what it is used to accommodate in the past.
“If anybody is concerned and worried about expenditures in my ministry, they should go and check because it is open. We have appealed to them several times but we met a culture that we cannot sustain,” Mohammed was cited to have declared.
PV: 0