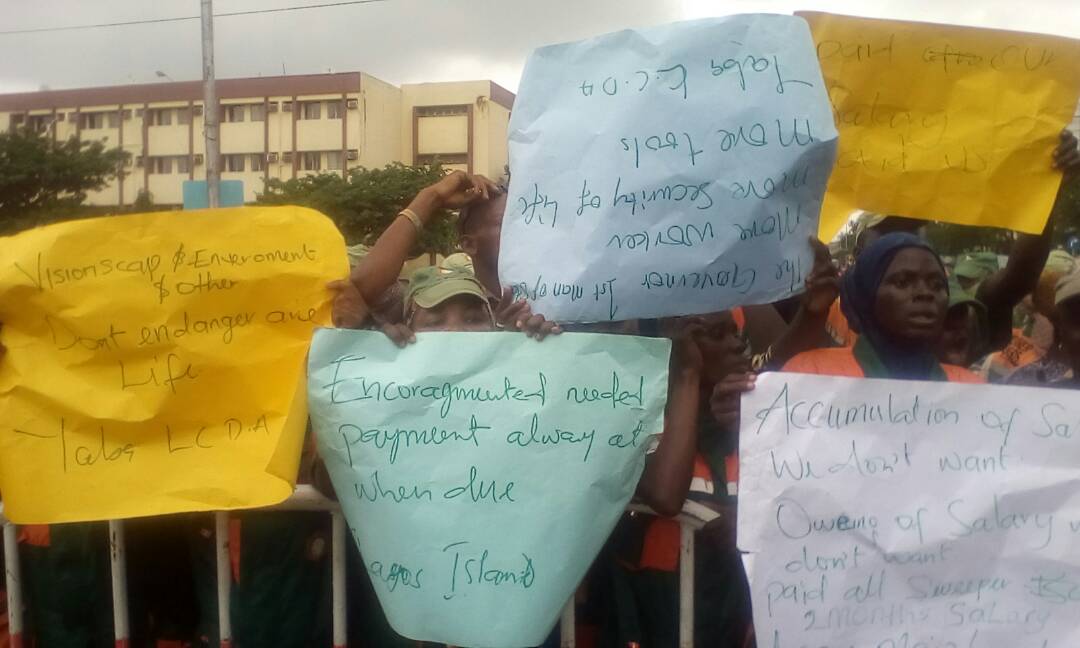 Share this on WhatsApp
Spread the love
By Lanre Adesanya
Scores of Cleaner Lagos, staffers of the government agency in charge of ensuring a tidy Lagos staged a non violent protest to the office of Governor Akinwunmi Ambode to seek redress for none payment of their salaries.
Chanting solidarity songs and wielding different kinds of placards with various inscriptions, the workers communicated the fact that they were being owed July and August 2018,salaries.
Some of the placards read, “Visionscape and Environment and others, don’t make life difficult for us,” “Accumulation of Salary: we don’t want deduction of salary,” “Don’t politicise our lives,” “Governor should know sweepers are also voters,” amongst others.
The workers complained that there were discrepancies in their salaries and that they have not been given identity cards and employment letters.
One of the protesters, Mrs. Salau Ologun revealed that their employers were making life difficult for them.
She accused the government of not being sensitive to their plights, adding that they could not continue to suffer in silence.
Addressing the protesters, the Permanent Secretary in the State Ministry of the Environment, Mr. Abiodun Bamgboye told the teeming protesters that their July and August salaries were ready.
Bamgboye stated that the government took the project from the company that was handling it and that they had been trying to put things in order, which he said was why things have not taken proper shape.
“We were able to clear the salaries from January to June. It is true we owe July and August, but we have got approval for the payment. We are trying to audit the staff and the accounts and ensure that we are not paying ghost workers.
“There are some anomalies in the system. Your normal salary is N18,500 per month. Whoever collects less than that should lodge a complaint and attach his or her payment slip if the person has been reporting for work regularly.
“We don’t want to send your money through intermediaries, which is why we pay you through banks,” he said.
The Permanent Secretary promised the staff that their identity cards, letters of employment as well as other conditions of engagement would soon be ready.
On a staff of the agency that lost her life, Bamgboye said that the ministry rose to the occasion as soon as the person was hit by a vehicle and that she was taken to Lagos General Hospital, where she was rejected.
He added that the victim was later taken to the Lagos University Teaching Hospital (LUTH), but that they told them that there was no space and that the victim died before they got to Lagos State University Teaching Hospital (LASUTH).
“We will visit the family of the deceased and do the necessary things. We have provided safety devices for you, but some drivers are drunk, while some are careless. We have insured your lives and our government is ready to compensate the family of whoever loses his or her life on the job,” he stated.
Share this on WhatsApp
Related Topics:Cleaner LagosUnpaid Salary
Up Next