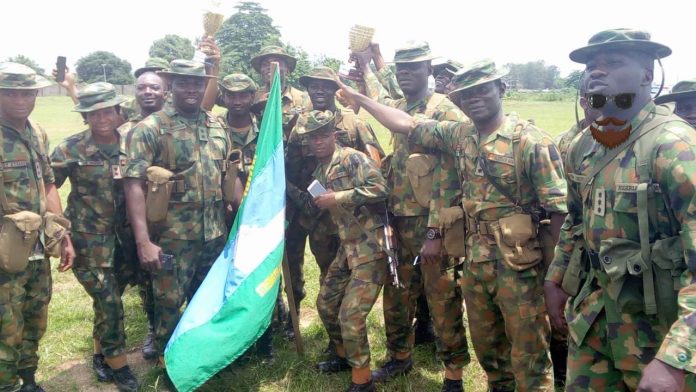 After a-four-day intense combat competition at the Military Cantonment, the event was rounded off at the weekend with a 3.2km race and Obstacle Crossing at the Lt Gen Tukur Buratai’s Complex, Ikeja.
9 Brigade emerged as the overall winner with 440 points beating 81 Division Garrison with 360 points and 35 Artillery Brigade, Abeokuta with 340 points to second and third positions respectively.
However, the 45 Engineer Brigade, Dodan Barracks, Obalende came last with 260 points and was awarded a beautifully carved wooden spoon.
Before the large crowd of spectators and supporters that thrung the venue,  cheering the officers as they engaged in 11 different obstacle crossing, they had completed a 3.2km race.
Every team, apart from their personal weapons, in addition, had one General Purpose Mechine Gun (GPMG); a stretcher and a First Aid box which served as their Medical needs should there be unforseen situation that requires Medical attention.
In his closing remarks, the Special Guest of Honour, Air Vice Marshall Abubakar Liman congratulated both the winners and losers noting that losing in a keenly contested competition was only a challenge to rise to the occasion and become better prepared to participate and win trouphies in future competitions.
He noted that as the Nigerian Army continues to forge ahead in its security duties across the length and breath of the country, “we would continue to train as good training is the best welfare in our chosen career.
“For the formations that excelled in this competition, I ugre you to keep the flag flying. For those that didn’t do too well, you still have the opportunity of showcasing your talents in subsequent competitions, adding that the competition being rounded off was the last in the series of competitions we have undertaken for the year 2019.”
Without doubt, AVM Liman observed, “I am optimistic that as we speak, the 81 Division Combat Proficiency Competition 2019 has achieved it’s objectives of equipping the competitors with all that are required for them to professionally discharge their duties in line with the vision of the Chief of Army Staff, Lt Gen Tukur Buratai.
Events competed for included Map Reading; Combat Swimming; Obstacle Crossing, Shooting involving personal weapons and Tug of War.
The Commanding Officer, 9 Brigade, Ikeja Cantonment, host of the competition, Brig Gen Etsu-Ndagi in his vote of thanks said, “there was no winner or loser among the Brigades that competed but 81 Division is the winner.”
Prizes were given to individual officers that distinguished themselves during the Competition