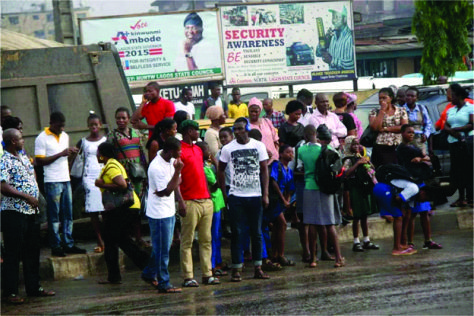 Lots of commuters are now stranded at the BRT Ikorodu Central Terminal in Lagos over the closure of the BRT buses by the Lagos Metropolitan Transport Authority over what the Authority described as the inability of the operators to follow laid down rules.

A visit to the Ikorodu terminal earlier this morning shown that a lots of commuters who had planned to board the buses to CMS and other parts of the city were stranded. It was also discovered that the commercial buses who were overwhelmed by the large numbers cashed on the helplessness of the commuters by charging exorbitant prices

LAMATA had last Thursday closed the Ojota yard deport of the BRT operated by the National Union of Road Transport Workers over what the Commissioner for Transportation, Dr. Dayo Mobereola described as the inability of the operators to adhere to the laid down agreement reached between them.

National Daily gathered that the actual crisis had to do with the discrepancies in the payment of salaries which some of the drivers said was fraught with irregularities. According to one of the drivers who craved anonymity, what they got as salaries was not what was agreed on when they employed them.

“We protested these irregularities to the government, I guess the results are what we are seeing now with the closure of the yards,” he explained.

He said out of the over 400 buses, less than 40 are actually on the road. “Aside from the salaries issues, the buses must also be serviced for optimal result,” he added

Speaking with one of the passengers, Yemi lamented the closure of the BRT yard, saying the decision was uncalled since no alternatives were provided by the government.

“It is survival of the fittest. You have to struggle with other passengers before you can get a space in the buses.  I hope government and the operator of the BRT will find lasting solution to the problems because the suffering masses”

Share this on WhatsApp
Related Topics:BRTLagos State Govt.LAMATA
Up Next