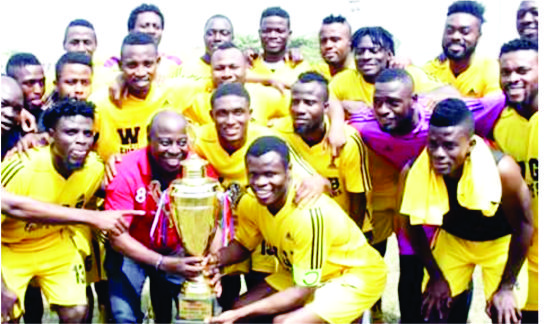 DOSU Joseph, ex-International footballer, who has been organizing the Nigeria Professional Premier League Stars, weekend brought together some home-based Super Eagles in an encounter with his own Westerlo Football Academy which was defeated, for the first time in eight meetings, by 2-0. The stars-spangled match was played at the Mountain of Fire football pitch.
MFM’s Abara Ifeanyi scored the only goal of the encounter with 18 minutes left in the encounter that both sides failed to create scoring chances.
The home-based side led by Shooting Stars coach, Gbenga Ogunbote, handed starting shirts to Ezekiel Bassey,Jamiu Alimi, Olufemi Oladapo,Kayode Agboola, Dele Ajiboye against the academy’s side led by Anzhi star Lukman Haruna.
In a chat with National DailySports, Ogunbote said he is happy about what the ex-international is doing by bringing all these players together. He was particularly delighted to have ended the Home Eagles and league side club players winless streak against Westerlo.
Of the 40 plus players invited, four, according to Dosu, were not available for the match. Salami Gbolahan, for instance, said he just had a baby. Among the invitees are Femi Thomas, Bright Babatunde, Jamiu Alimi, and Jimoh Ismail.
“I don’t feel bad because some of the players didn’t show up,’ the organizer said.
Referring to the accident that damaged him way back, Dosu, who started his academy in 2002, said he’s happy for still being active in football.
“Since 2002 we have produce a lot of players that are here today. Every year we have new players coming in and it will never be the same,” he said, adding he has been able to push them to clubs and they are doing very well.
He noted that the Nigerian football club league is getting better than last year and two years ago. “Every year LMC are trying to improve the game and I also think, we need a lot of sponsors in the league.”
Dosu used the opportunity to plead with all the clubs to pay up the league players, because the players work so hard for the club, and they deserve their pay and entitlement.
The FC Taraba, though battered by soldiers, have been protesting for their salaries and match bonuses for about a month now.
“We have not heard any good news since the protest start. We have seen a lot of clubs played till the end of season, and they were not paid. It’s a shame.”
Dosu, who said the tournament is organized for the older players to encourage the up-and-coming ones, said the 9th edition will be between his academy and the Europe-based players.
Among about 40 players invited are Taye Taiwo, Obafemi Martins,Kanu Nwankwo, Lukman Haruna, and Ugonna Uzochukwu.
Players like Haruna Lukman said that it was a great time to play with league side players because this is where he started from before travelling to Europe to play. He hopes this will continue to bring players together to have a great time.
Jimoh Ismail, Kwara United, said that it’s was a great time to play with where they started from and he thanked the organizers for giving him opportunity to be part of this.
Adeleye Olamilekan Aniyikaye of Ifeanyi Uba also concluded that this is all the league side clubs need after playing for their various team while on break. “You play game like this to see your old friends and players. It was a great time to see them again.”