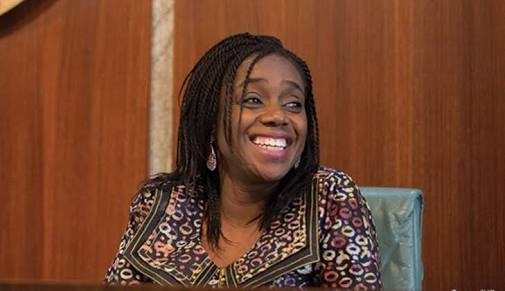 The Minister of Finance, Kemi Adeosun, has suspended the Director-General of the Securities and Exchange Commission (SEC), Mr Mounir Gwarzo.

In a statement signed by Deputy Director, Press, Federal Ministry of Finance, Patricia Deworitshe on Wednesday, November 29. Gwarzo is suspended in order to allow for an unhindered investigation of several allegations of financial impropriety leveled against him.

Adeosun has therefore set up an Administrative Panel of Inquiry (API) to investigate and determine the culpability of the Director-General.

The statement added that “She has directed the suspended SEC Director-General to immediately hand over to the most senior officer at the Commission, pending the conclusion of the investigation by the API.

According to the statement, two management staff of the commission – Mr. Abdulsalam Naif Habu, Head of Media Division and Mrs. Anastasia Omozele Braimoh, Head of Legal Department – who have been alleged to engage in financial impropriety in the commission.

Gwarzo becomes the second SEC DG that has been suspended in office. Immediate past DG, Arunma Oteh was also suspended in controversial terms by her commissioners. She was later reinstated by the government of Goodluck Jonathan.

Meanwhile, the Economic and Financial Crimes Commission has commenced investigation into the alleged allegations leveled against the suspended officials.

National Daily gathered that the EFCC wants to unravel the owners of the nine companies that were awarded contracts by the SEC under Gwarzo.

According to the EFCC, Gwarzo, his wife and other cronies allegedly used these companies to carry out illegal transactions in SEC.

Gwarzo, 30 months old as SEC DG, was suspended by the finance minister over allegations of financial misappropriation. He replaced Ms. Arunma Oteh, who resigned in January 2015. Gwarzo was then the Commissioner in charge of operations.

Gwarzo allegedly paid himself N104 million severance package when he was appointed DG SEC from the position of a Director in the same commission.

This is in total disregard to the standing rule in the civil service which states that severance benefit can only be paid to an employee who has concluded his or her service or has completely disengaged from service.

Since Gwarzo was promoted within the commission to become a Director-general, the service rule says that he’s not yet entitled to a severance package.

Why 2018 budget passage may linger till end of March