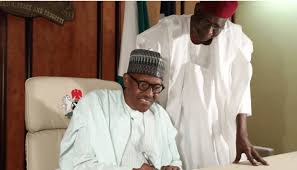 There appears to be fresh tension in the Nigerian presidency over the whereabouts of President Muhammadu Buhari, and the president’s Chief of Staff, Abba Kyari, who tested positive to coronavirus infection. Though, President Buhari was said to have tested negative to coronavirus, several stakeholders in the Nigerian project have continued to express perturbation that the president has not been seen in the public since the coronavirus crisis hits the State House, Abuja. The populist concerns were given currency by the shutting down of the Federal Executive Council (FEC), the National Council of States; these are critical government structures where major executive policy decisions are ratified. More so, the president has not been seen in public appearance since the suspicions or disbelief began.

Subsequently, an audio video was in circulation on various social media platforms, indicating that President Buhari and the Chief of Staff, Abba Kyari, have been flown out of the country for treatment.

It was highlighted that in the audio, a lady narrated how the alleged trip was arranged, claiming that she got the information about it from her friend whose husband is the pilot contacted to fly President Buhari and Kyari overseas.

However, the presidency on its official twitter handle @NGRPresident on Thursday refuted the information disseminated through the audio that went viral on the social media that President Muhammadu Buhari has been flown abroad for treatment over coronavirus. The Presidency @NGRPresident wrote: “the concocted audio message about President @Buhari’s whereabouts should be totally disregarded. It is Fake News in its entirety. The President tonight at the State House, at work.”

It was recalled that President Buhari had tested negative for COVID-19 while Abba Kyari had tested positive to coronavirus on his return from Germany and Egypt. During the recent trip to Germany, Abba Kyari met with officials of Siemens in Munich over 25,000 megawatts contract on electricity transition and distribution in Nigeria.

Despite the explanations of the principal officers in the presidency, essentially, the media aides, President Buhari’s notable loyalists have become more apprehensive; they are even in the vanguard of those asking the question: “Where is President Buhari?”

Kyari had returned to Nigeria on March 14 but ignored to quarantine himself or present himself for coronavirus infection test.

There is reason for the unease in the presidency since the uprising of disquiet in the open society on suspicion of the president’s infection status. Since the upsurge of the populist disquiet, the only trace of the president has been press statements emanating from the two principal media aides.