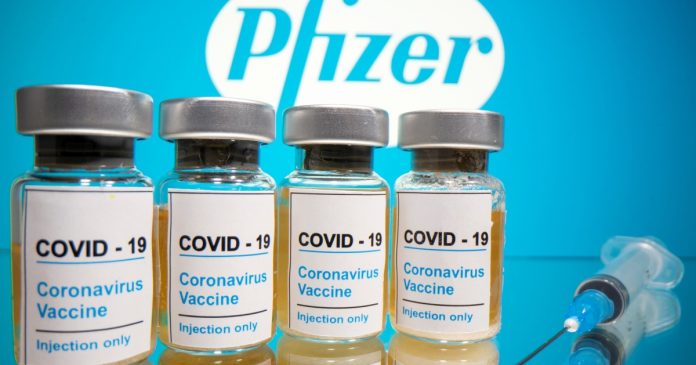 Pharmaceutical giant and one of the leading manufacturers of COVID-19 vaccines, Pfizer has said the rate of breakthrough infections are rising faster in individuals who were vaccinated earlier, therefore advocating for a booster dose.

Corroborating what Pfizer said, a report by Financial Times also stated that new data has shown that the efficacy of Pfizer and Moderna COVID-19 vaccines wanes over time and that a booster dose is needed at warding off the virus.

According to the information posted on United States Food and Drug Administration (FDA), has shown that the efficacy of Pfizer and Moderna COVID-19 vaccines wanes over time and that a booster dose is needed at warding off the virus

The Pfizer and Moderna pharmaceutical companies disclosed this information ahead of their presentation to a panel of advisers to the United States Food and Drug Administration (FDA) on Friday.

The panel is expected to make recommendations for whether more Americans should receive booster shots against the coronavirus or not.

The drug giant is partnering with Germany’s BioNTech SE to make the shots.

The decrease in effectiveness is “primarily due to waning of vaccine immune responses over time,” rather than the delta variant, Pfizer researchers said in the presentation.

Pfizer noted that data from Israel and elsewhere suggest that a reduction in efficacy against infection may be followed by reduced effectiveness against severe disease, especially among vulnerable elderly people.

It, however, said the vaccine continues to provide strong protection against hospitalisations and severe disease in the U.S.

Moderna is also supporting the case for booster doses against the coronavirus as its vaccine fails to provide full time immunity.

“This is only one estimate, but we do believe this means as you look toward the fall and winter, at minimum we expect the estimated impact of waning immunity would be 600,000 additional cases of COVID-19,” Moderna President Stephen Hoge said on a conference call with investors.

According to Reuters, Hoge did not project how many of the cases would be severe, but said some would require hospitalization.

The new data stands in stark contrast with data from several recent studies that suggested Moderna’s vaccine protection lasts longer than a similar shot from Pfizer Inc and its German partner BioNTech SE .

Experts said the difference is likely due to Moderna’s higher dose of messenger RNA (mRNA) and the slightly longer interval between the first and second shots.

Both vaccines proved to be exceedingly effective at preventing illness in their large Phase III studies.

Moderna on September 1 submitted its application to the US Food and Drug Administration seeking authorisation for a booster shot.

Hoge said data from its booster studies show the vaccine could increase neutralizing antibodies to levels even higher than were seen after the second dose.