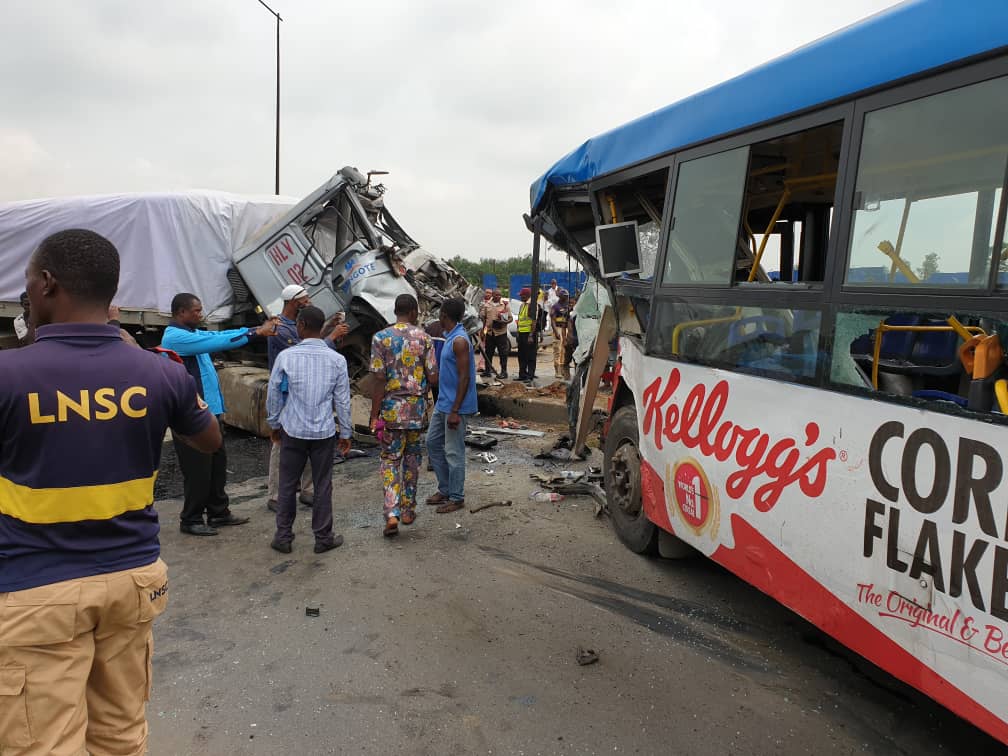 Tragedy struck when a trailer belonging to the Dangote Group conveying cement was said to have encountered brake failure, then, running across the pavement demarcating the road to crash into a blue Primero Mass Transit bus belonging to Lagos State Government with registration number LSR-228XS, which was conveying 40 seated and 20 standing passengers along Ikorodu road on Tuesday.
National Daily learned that the driver of the bus sustained serious injury and was in a critical condition while virtually all the passengers sustained various degrees of injury. The injured passengers was said to have been taken to the hospital by the Lagos State Rapid Response Team.
Reports indicated that the driver of the trailer escaped immediately the incident occurred. The accident was said to be caused by the heavy traffic on both sides of the road.
LASEMA was gathered to have indicated in a statement that recovery operation is still ongoing.
“On getting to the scene of incident, a Dangote truck fully loaded with cement had a brake failure and had a head-on collision with a Primero blue Mass Transit bus with registration number LSR-228XS, conveying 40 seated and 20 standing passengers.
“All passengers on board suffered various degrees of injuries with one female passenger losing her life and the driver suffered severe life threatening injuries with his leg totally decapitated.
“The combined efforts of the Agency’s Assets (Medical Unit, Tiger unit, Papa Eagle and Cobra unit) are on ground working alongside LNSC, Nigeria Police, FRSC and LASTMA to ease vehicular movement and ensure a swift recovery of the accident truck.
“Recovery operation ongoing”.

Share this on WhatsApp
Related Topics:AccidentBus Rapid Transit (BRT)Dangote truck
Up Next