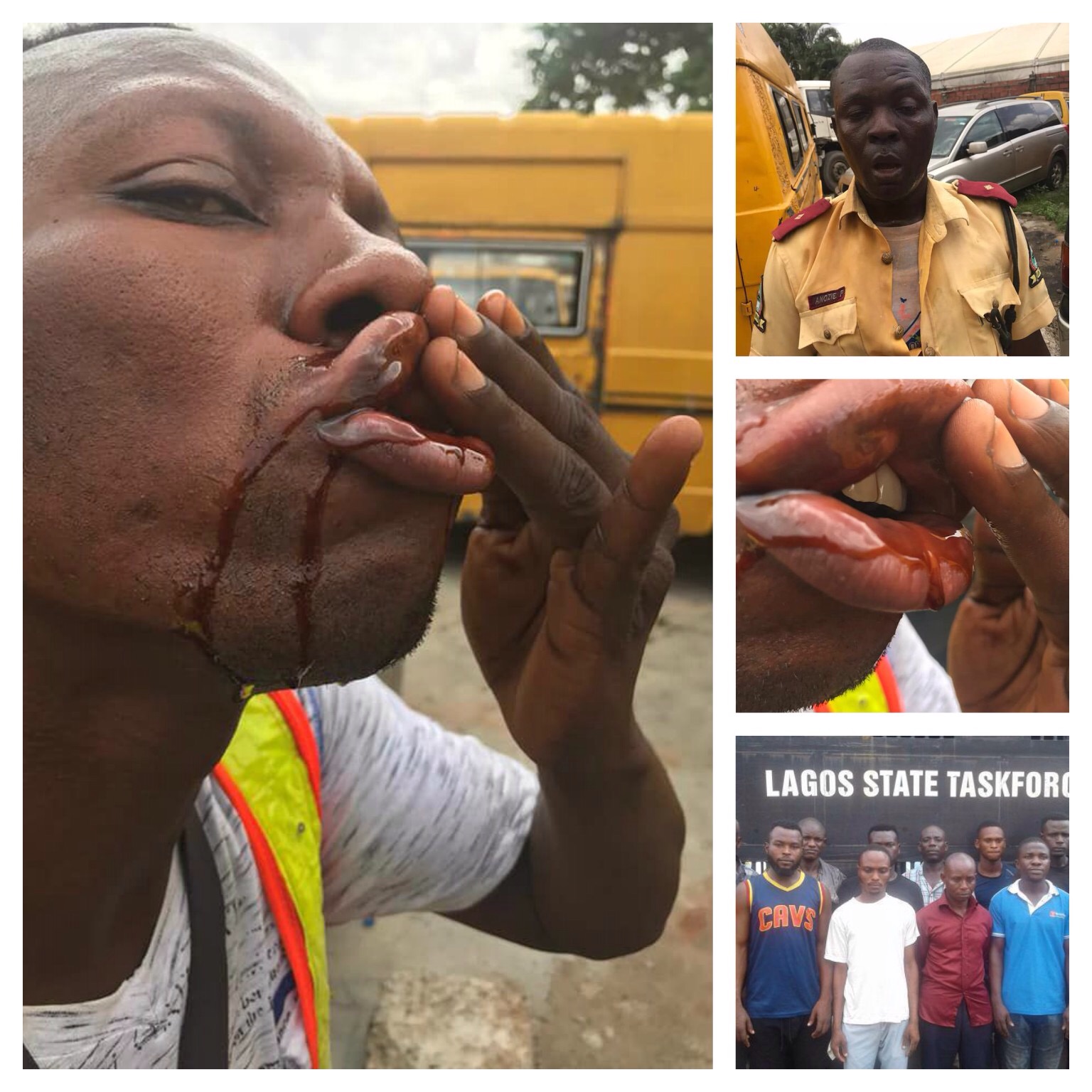 I understand you just arraigned 13 workers of 7-UP Bottling Company for allegedly assaulting officers.

I guess these 7-UP staffers were trying to do justice to their brand slogan — The Difference Is Clear!

If you ask Kazim Abayomi, Anozie Peter and Demeji Tonade — all attacked officers of Lagos State Traffic Management Authority (LASTMA) — I am sure they will agree.

They will nod and say, ‘truhly the diff is clear’.

What exactly are the differences here?

The diff is some persons are ready to die for their companies!

Perhaps they are well motivated. Or the culture to do so is well driven into their hearts.

Okay back to the attack story.

I see in another picture one of the beaten officers looking dazed.

He probably still doesn’t know what hit him.

Truly the diff is clear!

A beaten that will make a regular LASTMA official this confused is not regular.

I can imagine how they hurriedly ran to report case to you (at Lagos State Task Force).

In secondary school, my now very awesome friend Obinna Nwosu was a giant.

One day, dude lifted me, up far above his head and left me up to crash. I crashed hard.

Managed to go up and crawled to the school authority to report him.

Can’t remember what was done to him. But today Obinna is still my guy. Kids would be kids and adults would be adults.

Talking about adults being adults. I do not see why 13 of these adults should have decided to beat the ‘poor’, ‘innocent’, ‘God-fearing’ and ‘husband-material’ LASTMA officers.

According to the Chairman, Lagos State Task Force, CSP Olayinka Egbeyemi, these Government officers were only trying to do their work.

All they wanted to do was ‘kindly’ tow a 7-UP Truck off the road and ease off the traffic gridlock.

The towing they are paid to tow.

Now they get the beaten they do not budget for.

“The prosecution of the 13 arrested workers became imperative to serve as deterrent to others who might want to attack law enforcement officers in the course of enforcement of Governor Babajide Sanwo-Olu’s ‘Executive Order’ on traffic offenders across the State. It was disheartening that officers employed to safeguard members of the public were always being attacked by same people whose interest were being protected,” Egbeyemi told reporters.

Anyways, for 7-UP they can get in touch with me. So I tell them how they can win from this brand shaming.

The 13 LASTMA beaters were motivated by the just concluded Game Of Thrones series.

And, possibly, might have mistaken the LASTMA guys to be white walkers.

Kazim Abayomi speaking from LASUTH bed with injured body explains it better, ”most times, drivers and workers of this company always engaged us physically with different weapons while trying to enforce traffic laws on their illegally parked trucks on the road side”.

The 7-UP guys think they are members of the Night Watch. Any one that comes near their PARKED trucks is seen as trying to bring down their WALLS.

Now I understand why they all pleaded ‘not guilty’ before Magistrate Olajuwon Amos of the Lagos State Mobile Court who presided over the case.

They were defending their brands, their 7-UP, their walls, their slogan!

If LASTMA tows Coca-Cola Trucks freely, tows Guiness Trucks without any issue and still does same with 7-UP Trucks.

There would be no diff.

Case is adjourned. The commencement of trial would be on the 8th of August, 2019.

I figured the date was extended because of this other DAZED LASTMA officer. Dude needs time to recover.

Before he starts talking gibberish during interrogation.

I wish him quick recovery. Some kind of job and the hazards though.

I hope our nation gets better. That officers will be near perfect in the way they carry out their duties and obligations. I pray that citizens will learn be blessed with leaders of good examples.

After all, the system teaches us all to be touts. Is it not that guy that stole the mace the other day that got a sweet position recently?

PS: This case is a difficult one. How do you convince the judge that people working for a Sugar-Drink company beat up people who start off their day with heavy doses of Alcoholics? Or wait…are you sure 7-UP is not launching it’s own vodka series?