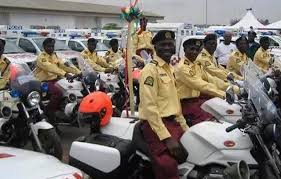 Chief Executive Officer of LASTMA, Chris Olakpe disclosed this while receiving the Executive and Members of Humanitarian Voluntary Association for Community Development who came to express solidarity and sympathy over the death of 18 traffic officials of the agency that died on line of duty in 2018.

Olakpe, who is a retired Assistant Inspector General of Police (AIG), said the traffic laws of the State equipped officials of the Agency with powers to arrest where appropriate and allow the alleged offender to pay the fine stipulated for the offence under the law.

In addition, the LASTMA boss said the law allows for penalties for neglect of traffic directions, while disobeying traffic control personnel also attracts fines and impounding of vehicles.

He warned that any motorist that proved to be an agent provocateur irrespective of position on the road will have his vehicle impounded and taken to LASTMA Yard to face appropriate sanctions in accordance with the relevant section of the law.

“Just from January 2019 till date, over 30 traffic officials have been brutalized by ill-tempered motorists and as an Agency, we owe it to our officials and their families the responsibility of ensuring their security and safety while performing their duties,” Olakpe said.

He assured that the Agency was reaching out to sister agencies and spirited members of the public in order to deepen collaboration and cooperation with a view to protecting State traffic officials in their domain.

He further disclosed that the State Traffic officials will soon commence another round of training on civility, politeness and protocol of arrest that would lay emphasis on respect for members of the public, just as he assured that adequate traffic measures have been firmed up to achieve seamless traffic during the Easter period and beyond.

Responding on behalf of the organisation, its President, Bankole Odunuga acknowledged the sacrifice and courage being displayed by the traffic officials in spite of intimidation by motorists, disobedience of traffic laws, assaults, injuries and deaths suffered in the line of duty.

Odunuga declared the readiness of his organisation to partner LASTMA in the area of public campaign and enlightenment in order to promote good road culture for sanity to reign on Lagos roads.