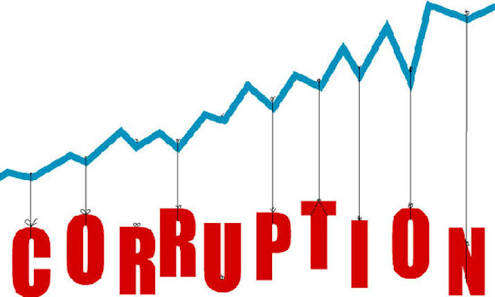 The Muhammadu Buhari’s administration has made unusually heavy weather of fighting the social monster of corruption. But as we have now seen, all these noises are on paper only because appearance is different from reality.

in reality, it is more like the less you look, the more you see because it is shocking that a government that sleeps and walks with the claim of fighting corruption, is at the same time, one in which the dominant topic of even beer parlour  discussions, is the notoriety of high profile officials of this same administration who indulge in terrible corruption in a scale that is unimaginable.

The truth however is that, the conversation around the theme of waging a decisive battle against corruption, has started many years before the advent of the Muhammadu Buhari’s second coming as an elected civilian head of state and head of government in the year 2015.

Benjamin Obasi Igweanyi  who wrote a textbook on the crime of corruption has also added his voice to the conversation.

“The Criminal Code Act which was enacted as far back as 1916. Unfortunately, the law does not give a precise definition of the world “corruption”. It merely describes it by providing that an offence of corruption is committed where a public officer corruptly asks receives or obtains any property or benefit in the course of his performance of his duties.”

He continued: “Thus, this leaves one with the task of still looking for the meaning of “corruptly”, “obtaining” is unlawful and therefore punishable. this technicality in comprehending the Criminal Code has attracted the condemnation of many scholars and jurists as many people who ought to have been convicted got unmerited acquittals on account of this defect in the law and other issues”.

The erudite lawyer also asserted that the next legislation worthy of the search is the Penal Code Law. In similar vein, the Penal Code he affirms, does not define “corruption” but rather describes same as follows:

“Whoever being or expecting to be a public servant accepts or obtain or agrees to accept or attempts to obtain or agrees to accept to obtain from any person for himself than lawful remuneration, as a motive or reward:…. shall be punished with imprisonment for a term which may extend to seven years or with fine or with both”. (The Crime of Corruption in Nigeria: Laws, Issues and Solutions by BEN.O.IGWENYI).

“The State shall abolish all corrupt practices and abuse of power”. This constitutional provision goes to show the fundamental yearning by Nigerians to decisively defeat corruption. Unfortunately, the current administration has decided to be ‘engaged’ to corruption just like jolly good couple. The fight against corruption in the last five years has been anything but law based but has been twisted into a political gambit whereby political opponents of the government in power are charged for corruption just for their ideological and political differences.  At a point, the then national chairman of All Progressives Congress Adams OSHIOMHOLE openly stated that once a thief in government of the then Peoples Democratic party led administration crosses over to the All Progressives Congress, then such a person would never be prosecuted for the crime of corruption.  The tempo of the National efforts at waging war on corruption has in the last five years suffered from what Economists call LAW OF DIMINISHING RETURNS.

This is therefore the apt time to interrogate the essence of working out a best approach and a workable solution on how to decisively conquer corruption without necessarily playing partisan politics with this assignment. This is the underlying reason a lot of critics are pleased that measures are about to be adopted to positively and constructively reform one of the law enforcement pillars against corruption which is the Economic and Financial Crimes Commission (EFCC).

As we now know, Ibrahim Magu was arrested and detained by security operatives in Abuja recently.

He is being interrogated by a panel President Muhamadu Buhari set up to probe the anti-graft agency which has been buffeted by avalanches of complaints of fighting corruption with corruption.

The panel began sitting some three weeks ago, but was only able to compel Magu to appear before it on two Mondays back.

A journalist wrote that Magu’s travails followed a memo by Abubakar Malami, attorney-general of the federation (AGF), in which the suspended anti-graft czar was accused of grave malfeasance.

He the embattled Acting Chairman of EFCC  was alleged to have mishandled the recovered loot and was selling seized assets to associates. The indictment by the Federal Attorney General and minister of justice Abubakar Malami is not exactly the first time that Ibrahim Magu has been accused of not adhering to the tenets of the law in the execution of his assignment in the Economic and Financial Crimes Commission. The then Director General of the State Security Services (DSS) Alhaji Lawal Daura, a trusted kinsman of President Muhammadu Buhari also did send powerful letter of indictments to the Debate of the Federal Republic of Nigeria stating emphatically that Ibrahim Magu is not a fit and proper person to hold the office of the Director General of the DSS.

In the same vein, there have been a plethora of opinions that go to show the same kind of indictments made against Ibrahim Magu by the AGF and the then DG of DSS.

For Instance, in a statement, a respected Senior Advocate of Nigeria and a reputable constitutional Lawyer, Chief Mike Ozekhome said he wrote Yemi Osinbajo, the then acting president, to complain about Magu whom he alleged was not being sincere with the handling of recovered loot. This was three years ago prior to the setting up of the Presidential panel now headed by erstwjile President of the Court of Appeal Justice Ayo Salami.

Hear Ozekhome: “I challenged him and his impunity severally in courts across Nigeria. I won virtually all the cases. I called for a change of the way and manner the ‘anti- corruption war’ was being selectively and opaqualey fought,” he said.

“I wrote a public letter in 2017, to the then acting president, Prof Yemi Osinbajo (SAN) at a time his boss, President Muhammadu Buhari, was sick on a London hospital bed. I complained bitterly, with facts, figures and data, which recovered looted funds and property, were being re-looted by the Magu-led team, who were supposed to keep the gate of our commonwealth.

“They looted our treasury in collaboration with their cronies, friends and acolytes. Magu was the new sheriff in town. I got no reply to my letter to Osinbajo. I wrote a reminder. No dice. I later challenged Magu publicly, face-to-face, on at least three occasions, one of which was at a ceremony at the federal high court in Abuja. Another was at a capacity-building workshop organised by the EFCC at its training academy in Karu, Abuja, which he graciously personally invited me to.

“He refused to change his ugly ways. It was clear to me and discerning Nigerians that power had gotten into his bald head. Power is an aphrodisiac, intoxicating liquor. It bemuses. It gives delusional ‘Dutch courage.’ It forces reason to vacate its seat.”

The senior lawyer said for five years, Magu continued to work as acting chairman of the EFCC, as against the provisions of section 2(3) of the EFCC act, 2004 which provides that the senate must confirm him before he could continue in his office.

Ozekhome said Magu recruited expert “constitutional lawyers” who argued that he could continue to stay in office.

He also accused Magu of subjecting those accused to media trial and humiliation.

He described Magu’s “arrest as a tragic reminder of the urgent need for temporary power wielders to act with moderation, modesty, circumspection and humility.”

Hence, an investigative panel was constituted in compliance with the extant laws governing the convening of such a body.

The EFCC does not revolve around the personality of an individual, and as such cannot be seen through the prism of any individual.

Therefore, the suspension of Mr. Ibrahim Magu, allows the institution to continue carrying out its mandate without the cloud of investigation hanging over its head.

The EFCC has many good, hardworking men and women who are committed to its ideal and ensuring that the wealth of our country isn’t plundered and wherein there is an act of misappropriation such person(s) are brought to justice.

Meanwhile, Mr. Magu is being availed the opportunity to defend himself and answer the allegations against him. This is how it should be, as is the fact that under the Laws of Nigeria every citizen is presumed and remains innocent until proven guilty.

We must realize that the fight against corruption is not a static event, but a dynamic and ever evolving process, in which the EFCC is just one actor; and as we continue to work towards improving our democratic process so shall every institution of ours also embark on that journey of evolution.

What is however important is that there must be accountability and transparency and our people must realize that they would be held to account. This is the building block in the fight against corruption, the establishment of the concept of Accountability and the recognition of the Rule of Law.

Those who see Mr. Magu’s investigation, as a signal that the fight against corruption is failing, have unfortunately, missed the boat.

There is no better indication that the fight is real and active than the will to investigate allegations in an open and transparent manner against those who have been charged to be custodians of this very system.

Under this President and Government, this is our mantra and guiding principle. There are no sacred cows, and for those who think they have a halo over their heads, their days are also numbered.

Magu was not immune – and regardless of the obvious embarrassment that potential acts of wrongdoing by him, given the office he held, may appear for the government.

No other administration in the history of Nigeria would have moved to bring into the light and public domain such an allegation.”

Can I conclude by challenging the President to end the marriage between Corruption and so many of his trusted allies and political office holders and to rejig the EFCC and bring in competent professional to manage the law based fight against corruption. The indictments against Ibrahim Magu must never be swept under the carpet because Nigerians want an end to impunity and selective prosecution of accused persons who have destroyed the economy of Nigeria and sadly, these thieves are still actively running affairs in many agencies of the Federal Government now as I write. Even the most illiterate vendor of water in Birnin Kebbi or the poorest farmer in Ekiti know that the current government stinks of massive and unprecedented corruption.