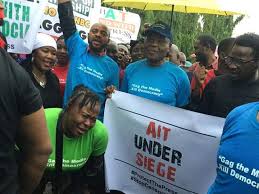 The Chairman Emeritus and founder of Daar Communications Plc, Alaogho Dokpesi, on Thursday led a mass protest to the National Assembly on the shutdown of AIT and Raypower   by the President Muhammadu Buhari administration, demanding the resignation of the Director General of the National Broadcasting   Commission (NBC), Ishaq Modibbo Kawu, on allegations of sentiments, intimidation and an attempt to emasculate the media in Nigeria.
Dokpesi at a news conference in Abuja on Thursday debunked allegations of the NBC that AIT and RayPower lacked editorial responsibility, noting that such allegations are misplaced.

Dokpesi stated that the media has a constitutional to defend the country’s democracy and hold government accountable to the people.

Aleogho Dokpesi acknowledged that the National Broadcasting Commission (NBC) sent several letters to the organization questioning segments of its Current Affairs Programme, News Commentaries and documentaries aired on the AIT Platform. Noting that the management of the organization has responded to the queries, Dokpesi remarked that this has become a pattern of intimidation and harassment. “Only six weeks ago, the Federal Capital Authority demolished the perimeter fencing of DAAR Communications headquarters in Abuja,” he said.

Dokpesi noted the foremost private broadcasting outfit in Nigeria is being targeted because of his political views.

He says, the documentaries, news commentaries and the contents of Kakaaki social which the NBC has cited with its queries are on key national discourse and that DAAR Communications as a partner in the country’s progress have availed its platform to re-echo National conversations.

Dokpesi reiterated his demand for the resignation of the Director General of the NBC Modibbo Kawu on the grounds of highhandedness and bias in dealing with the content of DAAR communications.

Dokpesi stated that the commitment of the media outfit in fighting the course of the Nigerian people and Nigeria’s democracy has never been in doubt as it has taken similar steps with unpopular policies of the previous administration.

Aleogho Dokpesi remarked that though he is in retirement from DAAR Communications, “the media must see this development from government agencies as a battle for freedom of expression and media survival as a critical part of national development.”