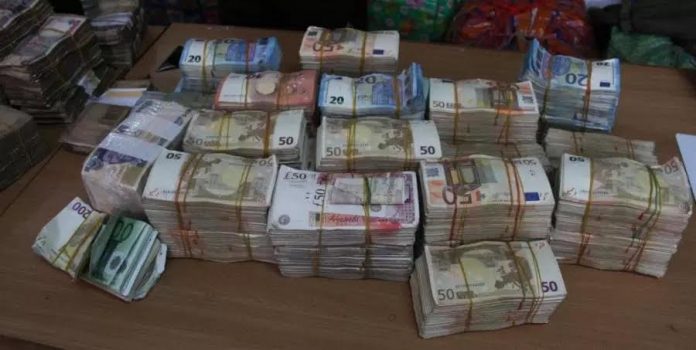 Share this on WhatsApp
Spread the love
The era of whistle blower is paying off for the Economic and Financial Crimes Commission (EFCC), in recovering of stolen monies as huge sums of money was on Monday intercepted at the Balogun market in Lagos.
The monies which were in different currencies included €547,730,  £21,090 and N5,648,500.
Head Media and Publicity of EFCC, Wilson Uwujaren, said the total haul was about N250m at the prevailing exchange rate at the parallel market.
He explained that the intercepted money was made possible as a result of information that about N250 million cash was being moved somewhere in the market for conversion into foreign currencies by unnamed persons.
ALSO SEE: Deceit: Man arraigned for N6m
Uwujaren added that operatives of EFCC responded and met the money at Bureau de Change office, noting that a large chunk of it had been converted into Euro and Pounds sterling before they swooped at them.
The Bureau de change operators said they were acting on the instruction of their boss who sent the money from the Northern states in Nigeria.
National Daily gathered that two persons have been arrested in connection with the recovered money while further investigation was ongoing.
Share this on WhatsApp