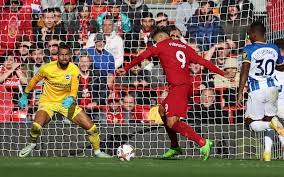 Liverpool FC  on Saturday was held to 3-3 stalemate at Anfield by visiting Brighton.

The English Premier League has continued to spring surprises in the new season. The big teams, with the exception of Manchester City and Arsenal, have been struggling to stamp their supremacy in the competition for the EPL championship.  Brighton on Saturday sized up Liverpool, playing at home, 3 goals apiece at Anfield.

Brighton put the heat on Liverpool with 2-1 lead in the first half. The home team, Liverpool, on return for the second half, with tow changes on the line, equalized through Femino to draw level at 2-2.  An own goal by a Brighton defender, gave Liverpool a temporary 3-2 lead. Brighton equalized towards the end of the second half to draw level at 3-3 and held on to it scores to the end of the game.