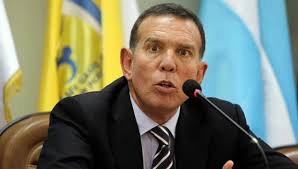 Former FIFA vice-president Juan Angel Napout has been sentenced to nine years in prison after he was convicted of racketeering and corruption offences as part of the FIFA bribery scandal.

A statement from the office of US Attorney Richard Donoghue said Napout, convicted of conspiratorial racketeering and two counts of wire fraud conspiracy, will also have to pay $4.3million (£3.3m) in financial penalties.

“Napout’s conviction, as well as the successful prosecution of other high-level soccer officials, has struck at the core of corruption in soccer and underscores the need for continued vigilance against fraud and bribery in the sport,” said Donoghue.
José Maria Marin.

Marin, 86, took bribes in exchange for the media and marketing rights to various tournaments, including the Copa America.