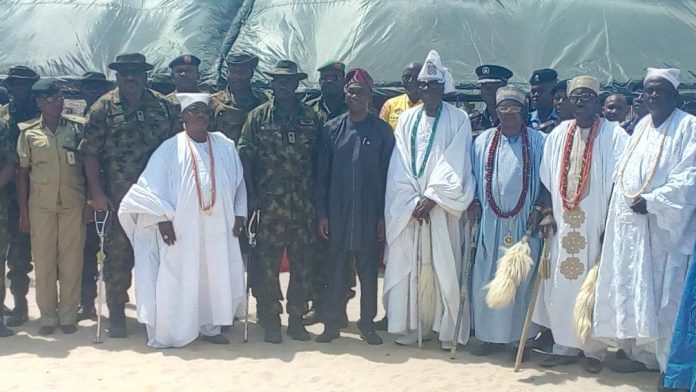 The Governor of Lagos State, Mr Babajide Sanwo-Olu has expressed concern over the  activities of illegal bunkering and pipeline vandalism in the South West region in the country.
He assured that with the flag off of Exercise Crocodile Smile IV, it would assist at eliminating the activities of criminals within the state especially now that we are approaching the yuletide period.
The Governor who was the Special Guest of Honour at the flagging off of Exercise Crocodile Smile IV at Tarkwa Bay in Lagos on Tuesday, was represented by his Deputy, Dr Obafemi Hamzat.
Describing the exercise as a “strategic foresight” of the Chief of Army Staff, Lt Gen Tukur Buratai, noted that it would deter criminal elements “safe place within Christmas period to operate.”
He added, “Exercise Crocodile Smile IV seeks to ensure peace and security especially during the weeks before Christmas festivities, is a welcomed development as it promises to ensure that criminal elements will have no safe place within that period.
“Just few days ago, what would have been a major disaster with monumental loss of human lives and properties was averted at Abesan-Ipaja area of the state where illegal bunkery was taking place and the people were quickly apprehended.
“As a government, we would continue to make efforts to support the military by providing all the necessary tools for them to provide security in Lagos.
Earlier in his remarks, the Chief of Army Staff, Lt Gen Tukur Buratai said the exercise would be intelligence driven that would dovetail into real time operation at any moment a potent threat is encountered and such would be in consonance with military constitutional roles of conducting internal security operations in aid to civil authority.
The army boss who was represented by the General Officer Commanding (GOC) 81 Division, Nigerian Army, Maj Gen Olubunmi Irefin explained that the exercise would help to reduce to the barest minimum the prevailing security threats in riverine area such as piracy, militancy, illegal oil bunkery activities, pipeline vandalism, cultism and other common sundry crimes
On his part, the Commanding Officer, 9 Brigade, Ikeja Cantonment, Brig Gen Etsu-Ndagi emphasised the imperative of training in peace time noting that “training is the main preoccupation of the military during peace time as such endeavours would make such military bleed less during war.’
It would recalled that Exercise Crocodile Smile 2 was flagged off at Tarkwa Bay on the 13th October, 2017 and this year’s exercise is been carried out simultaneously in 2, 6, 81, and 82 divisions of the Nigerian Army and the participants are drawn from the army and other security agencies.