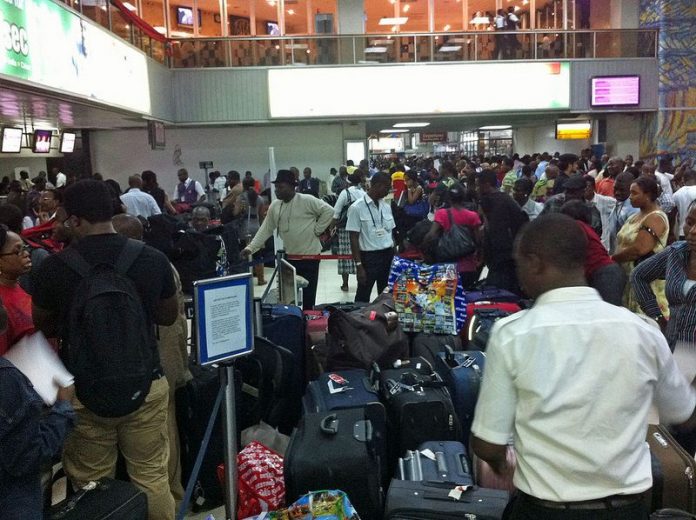 Extortion of travelers at the Murtala Muhammed International Airport Lagos (MMIA) has returned with full vigour with many passengers now at the mercy of security operatives stationed at the airport.

In 2018, the federal government introduced a seamless check-in process whereby passengers’ luggage were not physically searched at the departure hall but done by x-ray machines at the designated security screening centre.

However, a visit to the airport shows security operatives of the various agencies in the international terminal of the Lagos airport located themselves in a booth where they direct passengers to bring their luggage for physical search, forcing them to queue while the security operatives took considerable time to search every bag.

It was learnt that the security operatives were carrying out the same old routine of forcing passengers to pay money or have their luggage seized.

The passengers who were obviously in a hurry were paying so as to be allowed to go to the airlines processing counter to check in.

Investigation also revealed that most of the things they threaten to seize are materials and articles that are allowed to be checked in but when the officials are given more money passengers are allowed to go with their bags.

Meanwhile, one of the officials who spoke under condition of anonymity said the x-ray machine at the entrance was deficient and did not expose many of the prohibited goods.

When reminded that those bags would still be thoroughly screened before they were checked into the aircraft, he said not all of them would be screened again, but it AVSEC officials confirmed that all the bags would be screened before they were taken to the aircraft and passengers prohibited goods were found in their bags are called out by the airline security team and those prohibited goods are dropped and in some cases the passengers are stopped from travelling.

Meanwhile, an aviation security expert and the CEO of Centurion Securities limited, Group Captain John Ojikutu who was a former Commandant at the airport revealed that the problem of extortion has been at the airport in the last 30 years, and that security is compromised when security officials received inducement from travelers.

In her reaction, the General Manager, Corporate Affairs of FAAN, Mrs. Henrietta Yakubu said that FAAN made two numbers available for passengers to call whenever airport officials demand for gratification, adding, “There’s provision for Quarantine officials to use, I wonder why they have chosen to use the floor of the departure.”