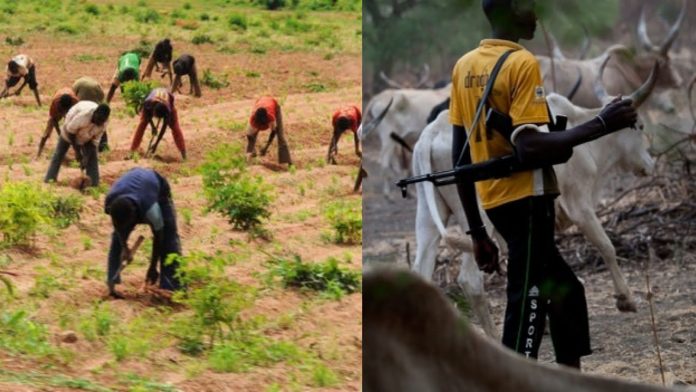 Nigeria risks acute shortage of food following activities of bandits and killer herdsmen in some parts of the country where many farmlands have been destroyed and farmers chased away from their farms.

It was learnt that farmlands in Riyom, Bassa, Barkin Ladi, Bokkos, Mangu, Jos South Local Government Areas of Plateau state had recorded such destruction by hoodlums.

Recently, 45 farmlands belonging to 25 families in Ta’agbe community of Miango chiefdom of Bassa were destroyed.

Similarly, farmlands with crops worth N1 billion in Kwi and Jol communities of Riyom were recently destroyed.

Pam Gyang, a civil servant and farmer, described the development as “unfortunate”, adding that the situation could lead to acute poverty, hunger and squalor in the nation.

According to him, the trend, if not urgently addressed, could also lead to famine in the state and the country as a whole.

“It is unfortunate and very pathetic that people suffered to farm and plant crops expecting a bumper harvest, but some criminals will just come overnight and destroy it.

“If this development is not urgently addressed, it will not only lead to high inflation, but acute famine in the country,” he decried.

On her part, Mrs Sarah John, a teacher, lamented that the destruction of farmlands in the state had led to the increase in prices of foodstuff in the market.

She added that the hike in prices of foodstuff has inflicted more hardship on Nigerians, particularly the poor ones.

“Today, prices of foodstuff have been rising on a daily basis because farmlands are destroyed and there is a short supply of farm produce to the markets.

Da Jerome Rwang, a farmer and resident of Rayfield, agreed with John, adding that it would be difficult for many people to survive if the situation continued.

He added that the nation’s economy would also suffer if nothing was done to nip the situation in the bud.

Also, Mrs. Rose Dung called on the government and security agencies to urgently address the situation by arresting the perpetrators, adding that they should also be made to face the full wrath of law.

She added that such a giant move would serve as a deterrent to others and would drastically address the inhuman act.