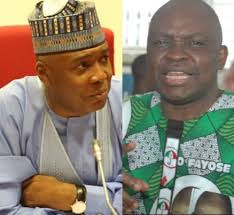 Governor Ayodele Fayose of Ekiti State at the commissioning of the 12.2km Obiri-Ikwerre- Airport Road, in Port Harcourt, Rivers State, encouraged the President of the Senate, Dr.Abubakar Bukola Saraki, to return to the Peoples Democratic Party (PDP).

The Ekiti State Governor assured the President of the Senate that the PDP shares in his travails in the All Progressives Congress (APC) and is solidly in his support. Fayose said the best time to leave the APC is now,

National Daily gathered that the Ekiti Governor advised the Senate President that APC is now a spent vehicle that can no longer take him to the expected political destination. He therefore, encouraged the President of the Senate to return home, maintaining that PDP is where he rightly belonged.

Saraki has just warn a protracted suit with the Code of Conduct tribunal at the Supreme Court after three years of political persecution on the matter by APC leadership since he became the President of the Senate in 2015 contrary to manipulations by some political godfathers in APC after the general elections.

The suit had dragged from the High Court of justice to the Court of Appeal before t3he Supreme Court handed down the final judgement that cleared Saraki.

The President of the Senate had previously survived several other political persecutions since becoming Chairman of the national Assembly.