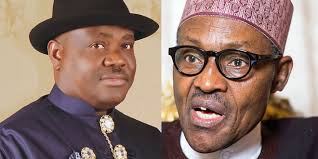 Governor Nyesom Ezenwo Wike, at the commissioning of the 12.2km Obiri-Ikwerre- Airport Road, in Port Harcourt, protested that the Economic and Financial Crimes Commission (EFCC) is investigating the finances of Rivers State in disregard of a subsisting court judgement yet to be vacated by a higher court. Wike, accordingly, condemned the Executive Order on corruption, declaring it unconstitutional. He decried that APC and the Federal Government of using the Economic and Financial Crimes Commission (EFCC) to hunt Rivers State Government.

Governor Wike congratulated Senate President Saraki n his victory at the Supreme Court, assuring him that Rivers people will always stand by him.

The governor bemoaned the frame-up of Saraki for armed robbery, which he said has negative consequences for the country; he advocated the upholding of the rule of law across all tiers of government, adding that is the only way to attain progress in the country.

National Daily gathered that the Rivers Governor acquainted Senate President Saraki that his political party, APC, has not kept her promises to Nigerians. He thanked the Senate President for commissioning the 12.2 kilometre dual carriageway.

Commissioning the road project, the Senate President said the Rivers State Governor has made Nigerians proud through the signature project, noting that the road is important because it will enhance investment opportunities in the state.

= “This is a road that is significant in the sense that it is from here that investors will come into the state. If you stand here and look across, you will be proud to be a Nigerian. Looking up there, I can see Nigeria is working and it can work better,” Saraki remarked.