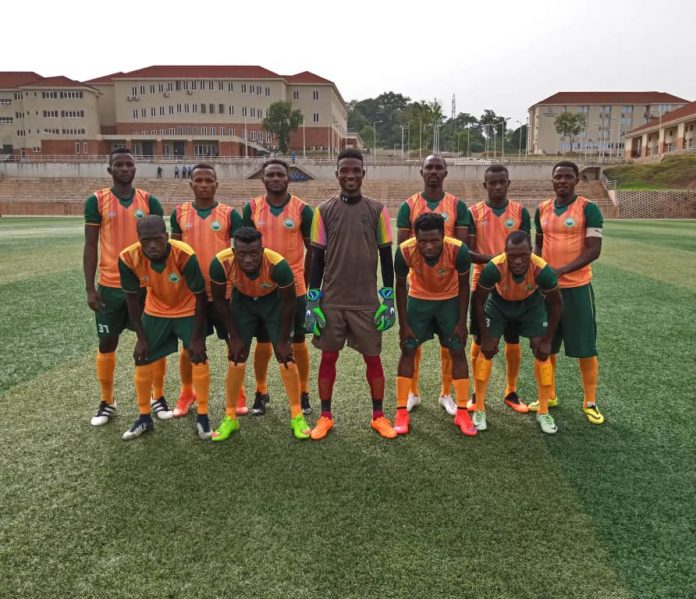 A goal in each half for Abia Warriors knocked Gateway United out of 2019 Aiteo Cup in the round of 32 at Warri City Stadium, Delta State.
National Daily learnt that the Akeem Busari side almost drew the first blood as early as the 2nd minute but no thanks to Godspower Igbah who missed a sitter with a heavy touch from Christian Samuel’s low cross.
Abia Warriors took the lead in 15th minute after a defensive mix-up from a corner kick left Adamu Azeez hapless as Paul Samson fired the ball into the net.
Ademola Raphael nearly levelled matters but his free kick from the 25 yards could not but hit the cross bar.
The flurry of attacks saw Godspower Igbah go close at goal again, but this time with a right footed shot from the edge of the box which spiralled off target.
ALSO READ: Dreamland Football Academy players participated in Teqball
25 minutes into the second half, Atilola Abdulsalami made it 2 for Abia Warriors. The forward beat Oluwole Johnson to a through pass, and then chipped the ball over onrushing Adamu Azeez.
The introduction of Seyi Okeowo and Fatai Bakare did give Gateway more foothold in the midfield but effort in the final third unluckily could not produce goals.
Gateway United FC have now shifted focus on NNL week 8 encounter against Nnewi United in Nnewi on Saturday June 22, 2019.
PV: 0