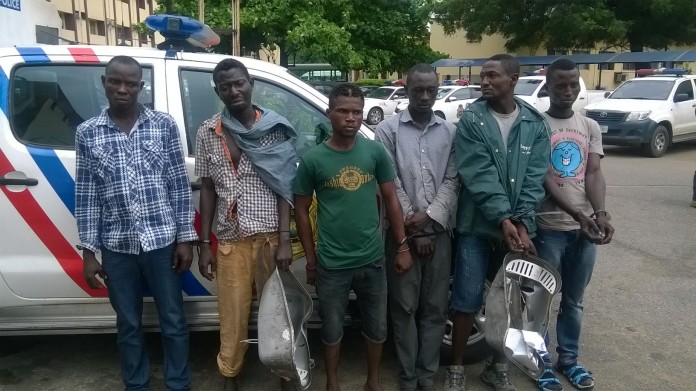 The operatives of Rapid Response Squad (RRS) of Lagos State Police Command, has busted a 6-man syndicate who specialized in vandalising and stealing of light-up cable wire, street lamps and street light poles installed by the Ambode-led administration to illuminate the state.

The suspects: Tunde Alaba, 29, Saheed Ismail, 27, Deji Afolorunso, 26, Sunday Obasanmi, 27, Jelili Abodunrin, 32, and Taofeek Oyedele, 28, were all apprehended about 2:30am, under the bridge at CMS after destroying the streetlights powering CMS under the bridge and its environs.

It was gathered that the RRS operatives who were patrolling the area, sighted them in the act of pulling down the street lamps, cables and poles, Government installed to lighten up the area before mobilising more officers for their arrest and movement to RRS Headquarters, Alausa.

The suspects confessed to have committed the crime. During interrogation, they said they have been living under the bridge for about four years.

Governor Ambode, has urged all Police officers to always check out Light – Up Lagos Project because of cases of vandalisation and theft of armoured cable powering the street lights across the state.

One of the suspects, Jelili Oyedele, who hailed from Awe in Oyo State, said that the hardship situation in the country forced him into the criminal act.

He said, “I came to Lagos about seven years ago. When I arrived, I was a bus conductor which I did for about two years. I joined the other accomplices under the bridge when I had no other place to live after my landlord had evicted me out for non-payment of house rent.

“Before now, I was working as labourers with the road construction company around Marina. But after our project ended, I chose to steal the cable to earn a living.”

Tunde Alaba, who arrived Lagos from Ede in Osun State, earlier in 2016, revealed that he left Lagos Island where he was squatting with a friend to avoid untimely death due to incessant clashes in the area.

“I ran away for my life for fear of death. Lagos Island is not safe for me any longer because of rampant killings and clashes between rival groups in the area. I moved to the under bridge for shelter. Although, I have not been doing anything tangible since I arrived the state, but I did have my daily meals through the sales of cables and iron steels”, he added.

Another suspect, Deji Afolorunsho, said that he was once a market sweeper in Idumota. “I swept the whole market every night and they paid me N2, 500 daily. But I lack contentment which led me to this crime”, he noted.

The lagos State Police Public Relations Officer, Superintendent of Police, Dolapo Badmus, said that the Police will not condone any criminal activity in the state.
The suspects have been transferred the Lagos State Environmental Task Force for prosecution. 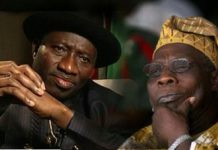