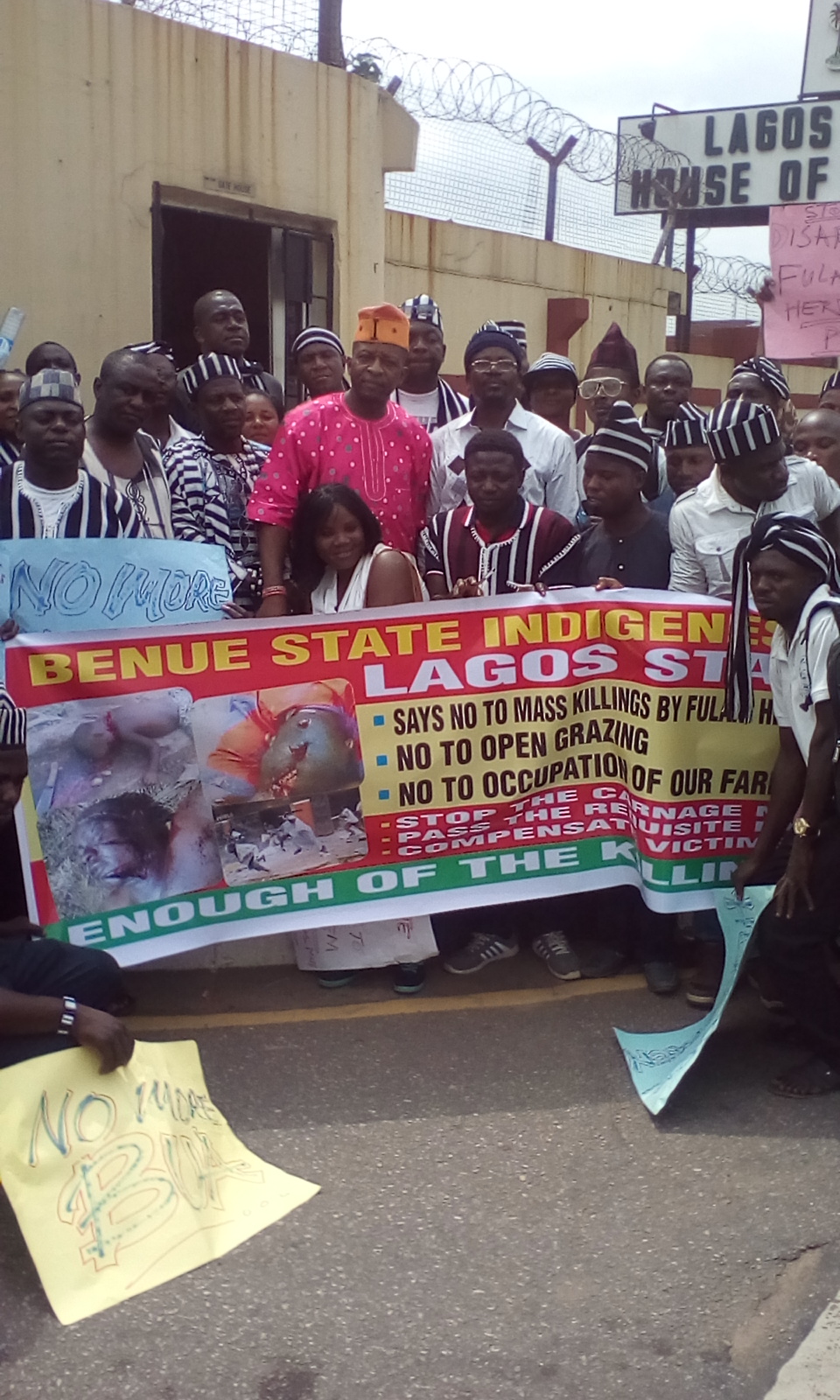 Piqued by the deliberate unleashing of mayhem on hapless people of the state by suspected Fulani herdsmen, indigenes of Benue State resident in Lagos on Friday staged a peaceful protest to the Lagos State House of Assembly  to galvanize speedy halt of the incessant attacks.

Some of their placards read; “no more herdsmen,” “disarm all Fulani herdsmen,” and “PMB say something about the killing.”

The protesters, who were in the Assembly under the auspices of ‘Mdzough Tiv Lagos State’ presented a protest letter on the issue, addressed to President Muhammadu Buhari to the lawmakers.

In the letter, the protesters demanded the immediate evacuation of all Fulani herdsmen currently occupying the ancestral home of the people of the state in line with the directive of the Benue State Governor.

They also demanded that the government must not be seen as partial as, according to them, ‘the death of one man is our collective death.’

“All bills/enactments pending at the National Assembly as well as the Benue State House of Assembly that are aimed at finding a permanent solution to these killings be given accelerated attention.

“They should be harmonized and passed into law with immediate effect. This should be done without unduly favouring any segment affected by such a bill/enactment,” they said in the letter.

In addition, the protesters demanded an immediate and conclusive investigation of all incidents recorded in the area so far, adding that all the perpetrators should be made to face the full wrath of the law.

Addressing the protesters, the Speaker of the House, Rt. Hon. Mudashiru Obasa said that the House was known for peace and that it is an advocate of peace.

Obasa, who was represented by Hon. Jude Idimogu representing Oshodi/Isolo Constituency II, said: “All we want is peace. We know that the Federal Government is trying, however , the government has to do more.

“We need peace in this country. Destruction of lives and property is not what we need in our nation. The leadership of the House will look into the matter as soon as we resume from recess on Tuesday 28th March,2017.