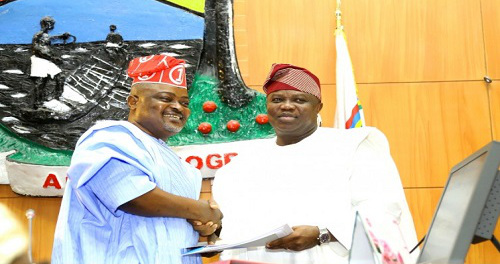 Share this on WhatsApp
Spread the love
The Minority Leader in the Lagos State House of Assembly, Akeem Bello, has said Gov. Akinwumi Ambode and Speaker Mudashiru Obasa orchestrated the defection of some PDP’s lawmakers to the APC.
Bello also added that the crisis in the PDP also contributed to their defection.
According to him, he and the other five lawmakers who defected were impressed by the governance style of the APC in Lagos State.
He spoke after bagging an award at the 4th annual general meeting and thanksgiving of the Cherubim and Seraphim Unification Church of Nigeria, Lagos State Chapter.
“We love the job and the leadership role of Governor Ambode and the way the Speaker of the house relate with the minority members,’ he said.
“I also saw that there was no headway in the PDP then. Up to this moment, there is still crisis within the party and division. When will one start his/her campaign?
ALSO SEE: FG to inaugurate 10 more new coaches on Kaduna – Abuja rail
“The party is in disarray; still battling with how to hold a congress up till this moment. All this put together encouraged us to defect.”
He then urged other lawmakers to maintain a cordial relationship between them and religious organisations in their constituencies.
In his address, the Lagos State Chairman of the church, Dr. Joseph Adagba, advised leaders in the country to promote peace and embark on developmental projects.
“After some two and half years of new government both at the state and the national levels, my appeal to those in authority is to, at all times, put in their best so that all citizens they are ruling over can enjoy the dividends of democratic government.’ he said.
“We enjoy more peace now than the past years. We should not go to sleep until our dear nation becomes the leader of all black nations in the world.”
Share this on WhatsApp
Related Topics:Akeem BelloAll Progressive Congress (APC)DecampGov. Akinwumi Ambodelagos state house of assemblyPeoples Democracy Party (PDP)Speaker Mudashiru Obasa
Up Next

Combating Boko Haram insurgency: We are not starved of funds to carry out our operations – Air Force