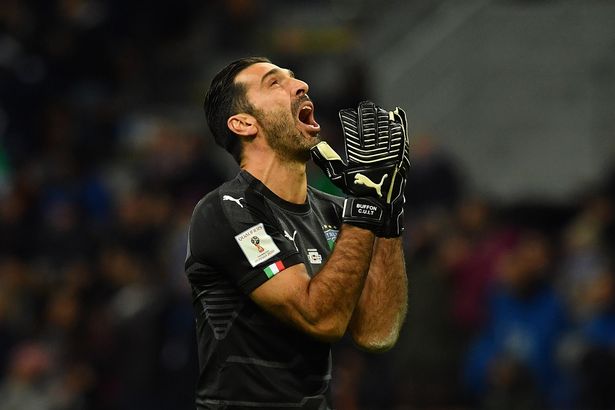 Gianluigi Buffon was supposed to go to a record sixth World Cup before retiring and walking off into the sunset. He was supposed to win the Champions League after reaching two finals. The football gods should have smiled on him more…
Anyways, he has won the World Cup and will always have that shiny medal to remind him that he’s a legend any time he forgets that. He’s the very definition of Captain-Leader-Legend. Anyone else who uses that moniker is just being a bellend…
Buffon has won as many World Cup medals as the entire nations of Spain and England (if you choose to overlook the infamous phantom goal). At 175, he has won more caps than England’s starting lineup against Germany.
I’ve always had a soft spot for the Azzurri. Even when they were known primarily for defending, and secondarily for brutality, they produced attacking players of supreme elegance: Franco Causio, Bruno Conti, Paolo Rossi, Roberto Baggio. And while Germany were a mere machine, and Brazil the pure spirit of abandon, Italy seemed almost a living thing, with passions, aversions, neuroses. They were like a wayward best friend, or even an unfaithful lover: maddening, yet irresistibly fascinating.
ALSO SEE: Dani Alves declares Gabriel Jesus the “new Ronaldo”
In fact, you never knew which Italy would turn up on the day. At Mexico 1970, they somehow topped their group while scoring only one goal in three games, and yet scored goal after goal in extra time in that immortal quarter-final against West Germany. At Germany 2006, they beat the hosts in the semi-final with an all-out extra-time attacking display, then five days later won the final on penalties after doing nothing but defend for all of the second half and two extra periods.
They were also capable of impossible results, either way. Who could have expected them to be eliminated by North Korea in 1966, or to defeat that glorious Brazil side of 1982? How did they get only a draw with New Zealand in 2010, or defeat hosts Argentina in 1978?
And now, in its way, the most incredible result of all: failing even to qualify. But losing out to Sweden isn’t really the story. Anything can happen in a two-legged tie. More significant was the slow, irregular decline of the team in major competitions, eventually dropping them into Pot 2 for the current set of qualifiers. That left them at the mercy of the draw, and they got Spain. There was always a chance they’d miss out, even if up until the final moment you somehow expected them to pull through.
It was sad to see them go down, even sadder to see them reduced to launching hopeless balls into the box against the tall Swedish defenders. This truly is their lowest point since 1966.