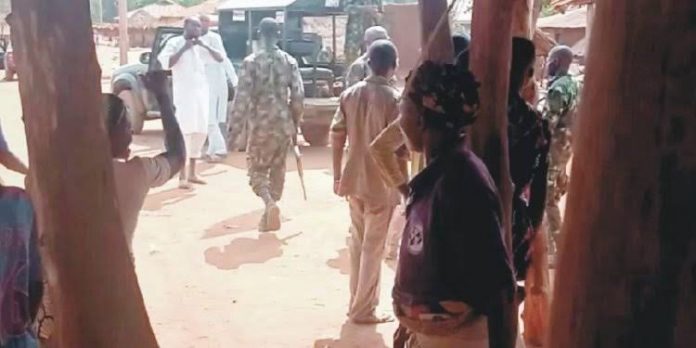 Residents and monarchs in Yewa North Local Government Area of Ogun state have lamented how they were brutalised by soldiers who escorted herdsmen to graze in their communities.

Palpable fear has since taken over the area with residents deserting many of the communities for fear of falling victim to the marauding herders, who are being backed by military escorts.

Seye Mulero from Ubeku, one of the villages in the area, said soldiers, numbering 10, had escorted some herdsmen on a mission to intimidate the villagers after they resisted an attempt by the herders to graze their cattle in the community.

The herdsmen, who had departed the village after their continued presence was rejected by the villagers, had suddenly resurfaced at about 2 pm on December 19, 2020 with a handful of soldiers from the 35 Artillery Brigade, Alamala, Abeokuta.

Mulero said: “Everyone was frightened by the action and utterances of the soldiers but I summoned courage to tell them how a Geography teacher Mr. Yomi Akinola and two students of Community High School, Ibeku, among others, were killed by the herdsmen while our women were raped and killed on their ways to the farm.”

Mulero’s blunt comments enraged the herdsmen who immediately asked the soldiers to deal with him. The military men allegedly responded by promptly seizing, kicking and flogging the young man mercilessly, leaving him serious injuries.

Innocent indigenes of Iselu, Ibeku, Agbon-Ojodu, Asa and other villages were also allegedly harassed and assaulted by the soldiers at the instance of the herdsmen.

About 29 villages in the area had been attacked in recent times by terror herdsmen who were said to have camped at Eggua, a neighbouring town, from where they moved with their hordes of cattle, ravaging farmlands within the Ketu-Yewa communities, which share borders with the Republic of Benin.

On January 10, 2020, herdsmen reportedly hacked 70-year-old, Pa Sola Ilo to death, and chopped off his son, Abidemi’s hand in broad daylight at Agbon village. Worried by the incident, villagers from the 29 communities staged a rally in protest and declared the herders persona non grata.

Oluwafemi Adeyemo, an indigene of Asa, said the incident was an insult to the villagers who ordinarily deserve adequate protection from the military.

Adeyemo said: The intention of the herdsmen is to exterminate us and take over our villages, but we resisted them because they have killed many people around here and ravaged our farms for too long.

He urged the state government and military authorities to call the soldiers to order to prevent the indigenes from resorting to self-help in order to protect themselves from herdsmen.