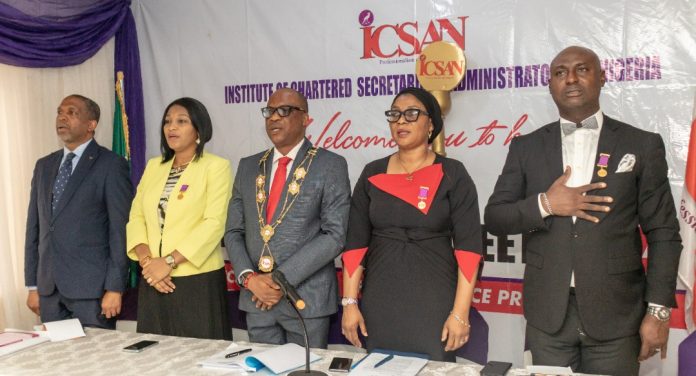 Share this on WhatsApp
Spread the love
The Institute of Chartered Secretaries and Administrators, (ICSAN), has opened up on the rising insecurity in the country and the lingering strike by the Academic Staff Union of Universities (ASUU).
Speaking at a news briefing recently, President of the body, Gbenga Owokalade said the centralized policing system has failed to produce the needed results.
According to him, Nigeria’s insecurity has overwhelmed the present arrangement, noting that state-owned policing system would adequately manage the country’s entire geographical locations and tackle the rising insecurity.
READ ALSO: Lagos ICSAN chapter swear-in Sokan, other new executives
He said ICSAN would rather backed a system that will enable each States to manage their own policing systems because of the diverse environments.
“Nigeria is mature enough to have state policing and should be bold enough to allow states to have their own security apparatus if both government and the governed say the country was a federal structure which allows it to replicate structures at all levels.
“What Nigerians need to do is to put in place governance structures and institutions that would keep the people working for the places in check.”
He said this is very important to ensure that a repeat of the Owo massacre does not happen and to allow the nightlife economy which is dying because of insecurity to be revitalised.
Also reacting to the lingering face-off between ASUU and the federal government, Owokalade urged both parties to speedily resolve their issues to address the negative impact of the ongoing strike action on the unengaged youthful population and the education sector.
According to him, the country is breeding a youth force that is not adequately engaged and may join the negative narrative already on ground.
He said there is a need to look at the future of the Nigerian child as both parties must make sacrifices to allow this issue to end for the sake of children and the sake of the nation.
According to him, the Interest of the students should be taken seriously and paramount as far as the Institute is concerned.
On high cost of doing business in the country, the ICSAN President urged the Federal Government to take necessary measures through the Central Bank of Nigeria to help the private sector.
According to him, the environment of business must be made user friendly and supportive of SMEs in particular, saying businesses are stressed by high inflation and worsening infrastructure.
He said the institute’s interest in the economy has influenced its choice of public discuss and advocacy issues, saying for instance its Annual Public Lecture looked at the Country External Reserves while its Annual Conference would be examining the National Debt of the country.
Share this on WhatsApp