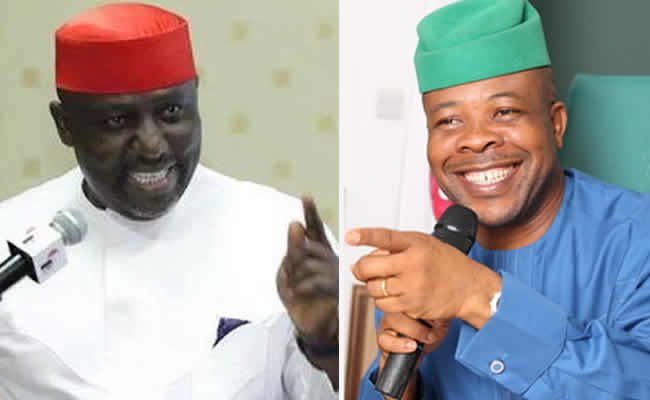 Imo State governor, Emeka Ihedioha, on Saturday took another swipe at the former governor of the state, Senator Rochas Okorocha, describing him as a man without character and a hater of Ndigbo.

Ihedioha who stated these during the 40th anniversary of the Ahiajoku Lecture held at the Ahiajoku Convention Centre, Owerri, the state capital, also lamented Okorocha’s decision to discontinue the Ahiajoku festival and lecture series.

He said the former governor never valued the culture of Ndigbo.

Ihedioha claimed that he inherited from Okorocha a state in ruins and one that had suffered monumental neglect in the last eight years.

He said: “Today, Imo State is on the march again. Never again a man without character will rule Imo State.”

“It is important in this short narrative to note that during what is clearly now properly categorized as the locust years (2011 – 2018) when a man who rode on the popularity of an essentially Igbo party to beguile Imo people, but who turned out to despise everything the Igbo hold dear, a man who limped into Douglas House Owerri on a lie of the garb, never held the lecture; instead, the name of Ahiajoku Centre was changed to Imo State Investment Centre and anything that could amount to an intellectual journey of discovery for the Igbo was shunned by this man for eight years.

“Even all the cultural artifacts at the Mbari centre were equally destroyed and termed as idols”, he said.