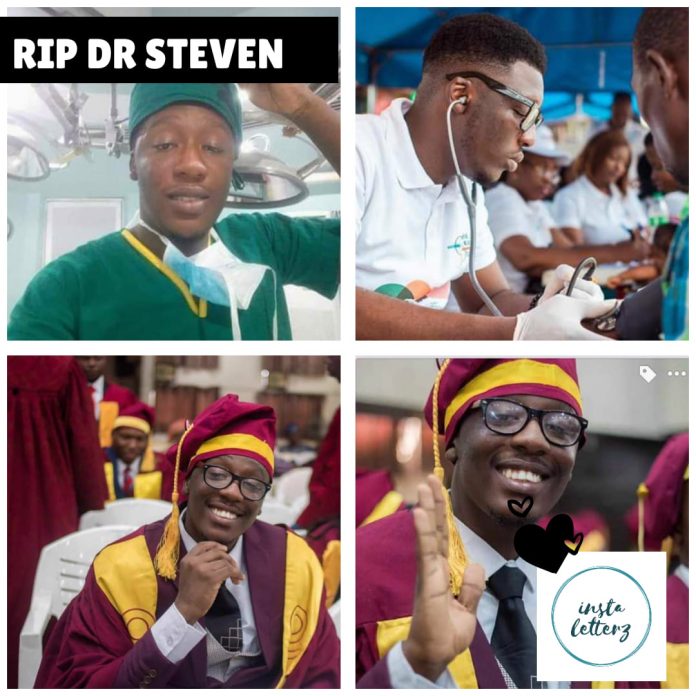 By Ediale Kingsley
Lagos State Police Commissioner, Zubairu Mu’azu, has been applauded for ensuring the killers of Dr Stephen Urueye, a House Officer at the Lagos University Teaching Hospital (LUTH, are brought to book. Mu’azu who has repeatedly assured security for all Lagosians is regarded for keeping true to his words. “Round-the-clock security is what he promised all Lagosians. We are happy with the way he is dealing with the bad eggs of the society and even those in the police” commented Kayode Bamidele on a facebook post.
The Lagos State Police Command has arrested seven suspects in connection to the murder. Urueye was stabbed by hoodlums after he was robbed of his valuables along Idi Araba road, where LUTH is located, on Thursday, April 4, 2019. He died hours later after efforts to save his life in the hospital failed.
The suspects are believed to have been transferred to the state criminal investigation department, Yaba, for interrogation. Urueye’s tragic stabbing happened just a day after he graduated from the University of Lagos (UNILAG) on Wednesday, April 3.
Our reporter, Ediale Kingsley, posted a dirge on his facebook wall which has at the time of making this report has gathered over 5000 Comments, over 6000 shares and over 200 reactions. One of the comments read”the perpetrators will die mysteriously. Demonic people, callous, wicked, brutalist, murderous, and envious beast. He shd have given them whatthe it demanded instead of struggled with them . Well the deed had been done. May his ghost continue to terrorize them until death” and the other by Favour Osioni says, “Rest in peace Stephen… I miss you”.
Here is the open letter/dirge:
Late Dr Steven Urueye,
We knew about the dangers that took your life but we do nothing about it. That’s who we are, that’s what we do best. Please forgive us. And rest in peace.
Sadly it’s not in our culture to value life. We as a nation value things of less value. We value matters that distract us from the main focus. Don’t blame us, blame our leaders. Okay I’m wrong, do blame us, for we are deserving of the kind of leaders we get.
For the leaders are a product of the society, the mindset and culture. If only things were different. If only matters were a little bit unlike the norm.
If so, you, a House Officer, won’t be stabbed by the infamous Idi-Araba boys who wanted to rob you in front of LUTH.
We are told that these idiots are domiciled in front of LUTH. They do drugs openly. They do crime in the open. They don’t do undercover. But we tolerate such people and go after the responsible lads with dreadlocks, tattoos and other hip hop anointing.
To shade their acts close to the canal and at night they sell terror, blood and danger.
The authorities and those that should do something do nothing. They do anything but disturb them. They do nothing close to reprimanding them.
ALSO SEE: Police arrest two suspects over murder of LASUTH doctor
One of my Facebook pals here said you managed to crawl back, to get yourself back to the Emergency ward in the heavy rain.
“Despite his best efforts at saving his life he passed out and died at the emergency ward due to fatal loss of blood” he said of you.
So that’s how you ended this journey untimely on Thursday night. This past Thursday night.
Your convocation was just last Wednesday at Unilag. Next day you departed the world in a despicable manner. Let’s not imagine the pain of your parents and loved ones. Let’s just hope they can live through these trying times.
How does one cope after sending his son to become a doctor, only to be killed mercilessly in the night. With no one to help.
Should we imagine the pain of your mum? Or the anguish of your loved ones. This is painful. This is Nigeria.
Sleep on. Rest on. We will move on. We always move on. We do nothing. We just move on. We don’t care. That’s who we shamefully are. Sorry but I do think you will get justice were you are now much more than you will get here.
I dare say.
People won’t reshare this letter so that it gets to the authority. People won’t dwell more on getting this justice. People will forget quick. That’s who we are.
I will do my part. I will keep inking. It’s all I have power to do. The pen is my gun. The ink my bullet. One by one, I hope to kill our wrong mindset. I hope to arrest the injustice around. I hope…
Your Mother’s Tears Spotter,
Ediale
#ForTheCulture.
PS: God keep him in a good place. Thank God you are not a Nigerian Leader. Thank God you are a God of justice. He will get one.
#JusticeForDrSteven