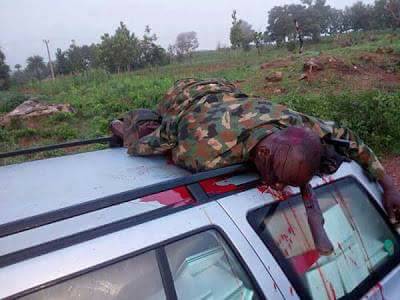 An unidentified soldier of the Nigerian Army has been hacked to death along Abuja-Kaduna express-way by an unknown persons.
It was gathered that the late Lance Corporal was said to be travelling from Kaduna to Abuja before he was allegedly murdered by two men while fixing his flat tyre.
Tired after fixing his tyre, the soldier decided to rest a bit before continuing his journey. It was gathered that two men came out from the bush and hacked him to death.
The gory pictures have been eliciting comments from Nigerians since the soldier met his untimely death on Friday night.
While some laid the death at the doorsteps of Boko Haram insurgents who might have swooped on him, others blamed Fulani herdsmen, Armed Robbers.

However, Richard Effiong, a Technical Engineer at Ministry of Defence (Nigerian army) warned soldiers to stop wearing their uniform while travelling from one place to another as criminals might take advantage to strike them at the least opportunity.
Also commenting, one Markeve said
“Boko Haram has hand in this, anyways R.I.P soldier.”
To Dramaking in his comment said,
“Smh….. 2 men or you meant 2 Boko Haram??? Coz Boko Haram are not humans, quote me anywhere…. #Shame.”
While blaming Fulani herdsmen, Boko Haram and Armed robbers, Tegonwa explained that the soldier might not have offended anyone noting that “this is the situation in which we have found ourselves in this country.”
Tegonwa, also alleged Badoo boys and other criminal gangs as responsible for the death of the soldier.
“If it is not Badoo, it will be Armed Robbers. If it is not kidnappers or ritualists, it will be some sadists killing for mere Schadenfreude.”
He further explained that, “This last group of murderers are growing in number because of hunger, job lay-offs,depression and poverty,” he reiterated. 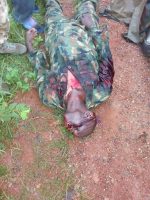 To Patrioti, he believes that the soldier’s uniform probably made him a prime target.
“His uniform made him to be a prime target from Boko Haram or arm robbers. Maybe, he thought his uniform can  scare away  bad “belle people.”
Efforts made to reach the Army spokesperson, Brig Gen Usman Sani to confirm the authenticity of the soldier was not possible.
Also, there is no official reaction by the military authority about the killing.
Abuja- Kaduna road has been notorious for various killings ascribed to either herdsmen or kidnappers.
National Daily recalls that one Colonel Samaila Inusa, who was kidnapped on Sunday 27th March 2016, was found dead along Abuja- Kaduna road.
The senior officer was kidnapped and killed by his abductors. His decomposing body was found around Ajyaita village off Eastern Bypass Kaduna, Kaduna State.
As a result of several reports of violent attacks necessitated the IGP Ibrahim Idris and the Nigerian Army to deploy personnel along the road especially when the Kaduna airport was serving as alternative to Nnamdi Azikwe International Airport, Abuja when it was undergoing repairs.