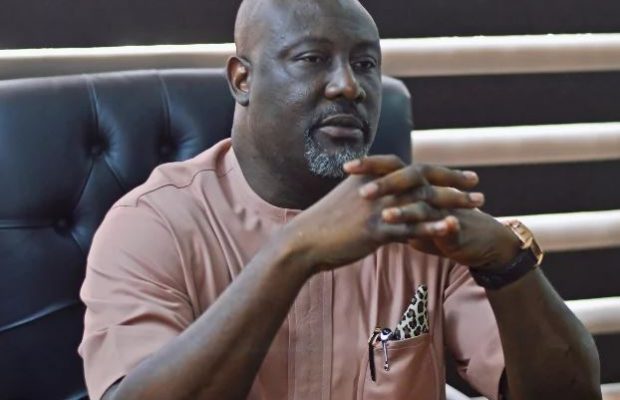 Share this on WhatsApp
Spread the love
The Independent National Electoral Commission has written Kogi West Sen. Dino Melaye a letter informing him it has received a petition for his recall.
A recall move was teed off last week in the Okun constituency Melayr represents, and over 188, 000 voters signed for the recall.
The Commission has formally acknowledged the receipt of the petition to the petitioners’ representatives and has conveyed a letter notifying Senator Melaye of our receipt of the petition,” Mallam Haruna, an INEC National Commissioner said in the statement.
Melaye has condemned the recall move, bragging it would fail because Kogi Gov. Yahayah Bello was behind it.
Melaye and Bello belong to the same party, APC, and they both fell out recently over accusation ranging from political corruption to intimidation.
ALSO SEE: INEC receives signatures on Dino Melaye’s recall
INEC will publish July 3 details of verification process of all the signatories to the petition to confirm if they are indeed eligible voters in Melaye’s constituency.
All things being equal, Melaye wil lbe the first senator ever recalled in recent memoryn.
But many believe Sen. President Bukola Saraki might head off the move when it gets to the National Assembly.
Melaye has been the biggest fan of Saraki who has been going through the wringer since he became Senate president in 2015.
Share this on WhatsApp
Related Topics:Independent National Electoral Commission (INEC)PetitionrecallSen. Dino Melaye
Up Next

Five constitutional hurdles that must be scaled to remove Melaye