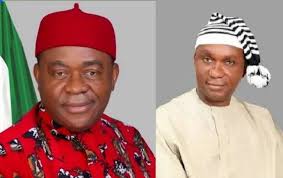 The investigation of the former Governor of Abia State, Theodore Orji, and his son, Chinendum Orji Eyinanya, has continued to generate high consciousness in Abia State with populist expectations and demands that the former governor and his son be sent to gaol for allegations of massive looting of Abia State treasury during the two-year tenure of Theodore Orji as Abia State Governor. Stakeholders in Abia polity were of the belief that former Governor Orji, currently representing Abia Central Senatorial District in the National Assembly, and his son Chinendum Orji Eyinanya, currently Speaker of Abia State House of Assembly,
are in their long night with impending doom of not being too far from prisons locks.

Indeed, most stakeholders in the state are mounting pressures on appropriate authorities to speed up the investigation of Theodore Orji and his son, and subsequently, incarcerate both.

A group, Abians  for Equity,  had demanded the Economic and Financial Crimes Commission (EFCC)  to be more committed to the investigation and prosecution of former Governor T.A Orji and his son Chinedu Orji on the allegations of looting N150 billion from Abia State treasury.

President of the Abians for Equity, Mazi Okezie Egwuatu, had in a statement, accused the EFCC of treating Orji and the son with kids gloves, not taking the investigation seriously as expected.

The EFCC is, however, not specific yet on what the corruption offence of Orji is. Acting on petitions from some stakeholders part of which date back to 2015, the former Abia governor is being accused of diverting N383 billion revenue from the Federation Account, N55 billion Excess Crude revenue, N2.3 billion Sure-P revenue, N1.8 billion ecological funds, N10.5 billion loan, N12 billion Paris Club refund, N2 billion agricultural loan and N55 billion ASOPADEC money while in office. All these are being investigated by EFCC, perhaps, before establishing particular case(s) against Senator Orji.
There are emerging innuendoes that Governor Okezie Ikpeazu and members of the Abia State Executive Council are under pressure to intervene, shield and rescue Senator Orji and his son, Chinedu from the corruption investigations by the EFCC.

About 100 accounts in different banks were alleged to be traced to Orji’s first son, Chinedu, who was said to be the Speaker of Imo State House of Assembly, over 80% of the accounts are still very active, according to a petition.

As the EFCC continues investigations, a stakeholder in Abia State revealed that  he had long conversation on a Friday with a senior administration official who called and engaged him on the phone over one hour, exposing the enormous pressure on them to make public statements in defence of Senator Theodore Orji and his son, Chinedu, who are facing EFCC investigation in preparation for their prosecution.

The senior official was said to have revealed that Orji and his son are allegedly compelling Governor Ikpeazu to deploy every apparatus of the government to defend and frustrate ther continuation of the investigations into the “mindless looting of Abia State resources by the former governor and his son.”

It was said that the Orji dynasty often remind Ikpeazu that they made him governor, insisting that the time has come for him to pay back.

It was alleged that there have been threats from the former governor’s family to destroy Governor Ikpeazu politically if he fails to “do the needful.” It was added that they have some compromising pictures of the governor which they are willing to release to their errand boys in the media.

The senior official also hinted that the Orjis are pressuring Ikpeazu to reshuffle his cabinet and send away some of the recalcitrant officials who are not loyal to the Orjis, the stakeholder said. “I learnt that some of the new hands recruited by the governor few months ago have been penciled down for dismissal after it was reported that they have been advising Governor Ikpeazu to take advantage of the scandal to dissociate himself from the parasitic influence of the Orjis,” the stakeholder said.

He added that he was also told that funds have been voted to sponsor several “pro Orji” rallies in Umuahia and Aba. “These rallies, I understand, would commence soon and would receive great media coverage all in a bid to create the impression that the Orjis are loved in Abia.

“My informant also revealed that every commissioner and senior administration official have been directed to map out funds for the rallies and another chunk to pay for favorable media coverage,” he said.

The stakeholder further alleged: “Last week, I gathered that the Secretary to the Abia State government made several runs to the EFCC in a bid to scuttle the prosecution of Theodore Orji and his son.”

He also alleged that Governor Ikpeazu is believed to have also been instructed by his political benefactors to use the Vice President’s office to mount pressures on the EFCC to drop the investigations. The Vice President, Prof. Yemi Osinbajo, is alleged to have rebuffed such suggestions from his friends in Umuahia.

These allegations and narratives portrayed the anger of the people back in Abia State with the expectation the EFCC should achieve the same result on former Governor Uzor Orji Kalu who is currently in jail.

“I sympathize with the Orjis. They are in their long night and the feeling of betrayal is killing. I gathered in Umuahia on Saturday that all the key officials who served in the Theodore Orji cabinet have all declined appeals to them from the former governor, his son and their emissaries to speak up in defence of the former governor.

“A particular administration official from Isuikwuato/Umunneochi have reportedly asked Theodore Orji to pay him his severance allowance of about N7 million before a new PR contract can be negotiated,” the stakeholder alleged.

He celebrated that senior PDP officials in Abia State are actively working with EFCC to ensure that detailed facts are exposed in the investigation by the commission.