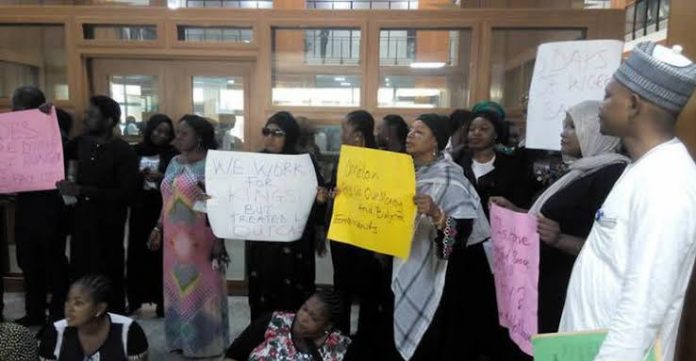 The National Assembly Legislative Aides Forum on Tuesday in Abuja protested the non-payment of their 20 months’ salary arrears.

Zebis Prince, who spoke on behalf of the protesting aides, said since the inauguration of the 9th Assembly, their salary arrears have been withheld by the management.

He said the matter was referred to the House Services Committee with the mandate to, among other things, investigate the irregularities in the payment of legislative aides.

“We are disturbed that despite an express legislative resolution mandating the CNA to ensure payment three weeks after, the Chief Accounting Officer of NASS has chosen to hold us to ransom.

“The continued refusal of CNA to pay about 2,500 aides their 2019 salary arrears have created a sharp division between them (aides) and the management,” he said

He said having exhausted internal dispute resolution mechanism, the forum has resolved to pursue their grievances using all legitimate tools at their disposal

“So, we are presenting our demands to the Speaker of the House of representative, Rep. Femi Gbajabiamila, as the boss of our principal and the Senate President.”

The News Agency of Nigeria (NAN) reports that some of the demands of the protesters include: implementation of minimum wage, duty tour allowances and training.

While addressing the forum, Mr Gbajabiamila said that every labourer deserved his wages, adding that the NASS leadership were already looking into it.

“The wages owed since 2019 is not excusable, I will just ask that you are a little bit patient and a little understanding.

“I know that there is financial constraint but one thing I know is that, I will make sure that these things are resolved and your arrears paid.

“We appreciate you by bringing this peacefully into our attention,” he said.