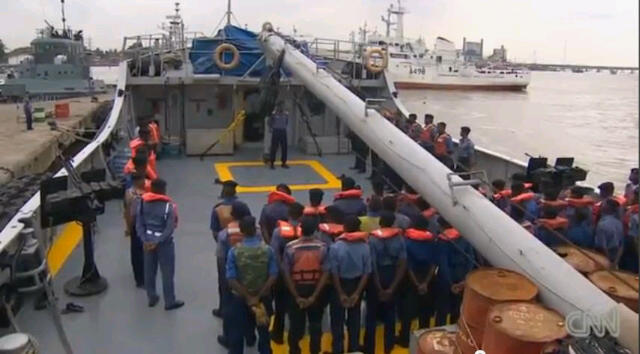 …Deploys three vessels, one aircraft, helicopter to Gulf of Guinea

After successfully rescuing hijacked oil tanker and its 16-man crew and arresting six pirates, killing one, the Nigerian Navy (NN),Wednesday vowed to continue to protect the nation’s critical infrastructure at sea.

The exercise, which is an international annual exercise, was started in 2010, as a joint maritime interdiction and interoperability venture between the NN and navies of other countries including United States, Europe and other African countries.

As part of this year’s exercise, Obangame, which means ‘Togetherness’ in Fang language, saw the deployment of three naval ships- Nigerian Navy Ships (NNS) OKPABANA, PROSPERITY and CENTENARY and they are expected to checkmate maritime illegalities on the GOG.

While addressing newsmen on-board NNS OKPABANA, Rear Admiral Abdulkadir said, “This exercise is aimed at bringing our partners to train as well as practice maritime interdiction and interoperability.

“This year’s exercise was tagged Operation Obangame Saharan Express because the exercise area is from Morocco to the Mediterranean and then the Gulf of Guinea.

“The exercise which will end on March 25, is focused on crude oil theft and hijacking at sea.

It would be recalled that few weeks ago, the Nigerian Navy rescued a hijacked oil tanker, MV Maximus on the coast of Abidjan as it sailed towards Sao Tome and Principe.

The Chief of Naval Staff, Vice Admiral Ibas and the navy will continue to put more effort towards curbing the different crimes at sea.

Also present were the outgone and incumbent Command Operations Officer, Eastern Naval Command, Commodores Ime Ekpa and Rasaq Babalola, respectively, as well as the Captain Suleiman Dahun, the information coordinator for the exercise.