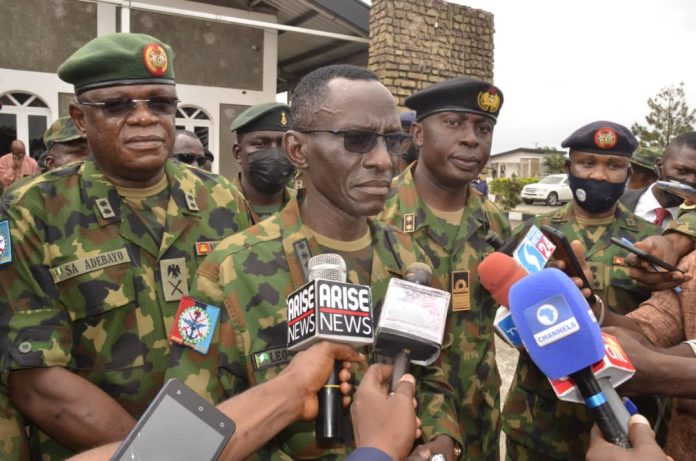 The Chief of Defence Staff (CDS), Gen. Lucky Irabor, has urged media organizations’ to support the Nigerian armed forces in its fight against bandits and terrorists in the country.

General Irabor gave the charge on Wednesday at a meeting with top executives and editors of major media organizations with the theme, “Role of Media Executives and Editors in National Security and Conflict Sensitive Communication”.

Irabor said the meeting was informed by the fact that both the military and the media pursued common causes of freedom and liberty in a secure environment where individual desires of every citizen can be fulfilled.

READ ALSO: Military is loyal to democracy in Nigeria – CDS

“What so ever influences one may have outside the shore either territorial or space of Nigeria, we must begin to understand that you are the best person to keep Nigeria safe.

“No one outside of these shores loves you better than you love yourself because you are the one that meets this challenge,” he said.

The Director, Defence Information, Maj.-Gen. Jimmy Akpor, said the CDS considered media executives as most worthy to interface with, considering their standing in the spectrum of the media space.

Akpor said the media had the cardinal role to play in advancing the cause of national security.

He said that the leadership of the armed forces viewed media executives, editors and bureau chiefs as critical stakeholders that could not be ignored.

Akpor noted that the society approach, which the CDS had continued to advocate, was a sure way to go in overcoming various forms of security challenges confronting our nation.

He noted that with the collaboration and understanding between the armed forces and the media, both parties would henceforth be on the same page in matters of defence and national security.

The Chief Executive Officer, Media Today, Charles Odenigbo, said the interface would mark a new beginning for military and media relationship in Nigeria.

Odenigbo said a road map would be developed at the end of the parley for clear understanding of the roles of the media in national security matters and conflict sensitive communication.

He said that the editors or media would have to contend with the code of ethics because the functions of the armed forces and the media are very clear.

“The media is constantly looking for information backed by concrete evidence, concrete facts and they must be time bound because time is the oxygen of the Newsroom,” he said.