The Executive Secretary of the National Human Rights Commission, Tony Ojukwu, had in Abuja on Saturday, decried that despite the progress made in the country’s democracy, Nigerians  have continued to experience human rights violations resulting from security challenges, youth unemployment, recurring mass atrocities and crimes, kidnappings, incessant extra-judicial killings and torture, inhuman and degrading treatment, discrimination, injustice and gross inequalities, rape, sexual and gender-based violence, impunity, weak institutions and lack of political will to hold perpetrators accountable for several types of human rights violations.

The Executive Secretary expressed optimism that the highlighted crises can be curtained “if we speak the universal language of respect for human rights and fundamental freedoms which are the foundations of any democracy”.

Tony Ojukwu emphasised that democracy and respect for human rights are interdependent and mutually reinforcing the principle of non-discrimination, justice and equality before the law, saying they are key in building an inclusive and egalitarian society which leaves no one behind.

The NHRC Executive Secretary encouraged Nigerians to take advantage of the current constitutional review process to make meaningful contributions to the amendment of the constitution towards having a peaceful and egalitarian society free from discrimination, injustice, inequality, and rancor where everyone will be happy and fulfilled as a citizen.

Ojukwu declared: “It is imperative to preserve rights to life and avoid wanton extrajudicial killings in our democracy. All human beings are born equal in dignity and rights.”

The NHRC Executive Secretary demanded governments at all levels in the country to “redouble efforts to preserve the lives of citizens by, among other things, protecting our borders and eliminating the arms and weapons of destruction that are flocking into Nigeria and have littered our land.” He regretted reports of proliferations of small arms and lights weapons, which he noted, “have only ended up making us a people not shocked by violence anymore as we bury our dead victims while the producers and their allies smile to the bank.”

“We must join hands to support the government in its efforts to stop this dastardly act” he maintained.

Ojukwu, however, appealed to Nigerians not to lose hope but be optimistic and “support governments in building the nation of our dreams where people will travel without the fear of being kidnapped or robbed; where our children will be in school and we will be at work in peace; where our youths are gainfully employed and shun crime and violence, and businesses will flourish in an enabling environment.”

Ojukwu condemned killing of security operatives, maiming and destruction of government property, at this critical time of nationhood, advocating stoppage of destructive violence and criminal conduct. He advocated dialogue and other democratic processes of resolving contentious issues in nation-building. According the Ojukwu, “there are better and more civilized ways of expressing grievances.”

The NHRC Executive Secretary, thereafter, commend the Federal Government for accepting June 12 as Democracy Day in Nigeria rather than May 19 when the contemporary democratic dispensation commenced in 1999.

The Executive Secretary also advocated that those who conducted the June 12 presidential elections, deserve to be remembered. According to him, “that election of unequaled credibility in Nigeria was conducted by Prof Humphrey Nwosu and his National Commissioners, Resident Electoral Commissioners, Directors and other staff.”

Ojukwu declared: “It will be justice if these citizens who made June 12 Democracy Day possible by conducting the freest and fairest elections in Nigeria’s history, who at the risk of their lives challenged the military government in court for the annulment of June 12 election, are equally honoured, this is not beyond the government.

“This can become a model for National rebirth and call for patriotism and nationalism amongst Nigerians.”

The Executive Director assured of  the commitment of the NHRC to continue to educate Nigerians about their rights and responsibilities in order to inculcate the culture of respect for human rights in them. He reiterated that law enforcement and human rights are mutually reinforcing rather than being anti each other as perceived by most law enforcement personnel.

The ES, accordingly, advocated  more cooperation and understanding between law enforcement agencies and the Commission, noting  that the primary purpose of law enforcement by the government in a democracy is the security of life and property (protection of human rights) of the people. 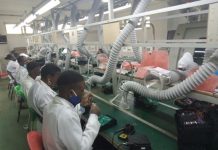