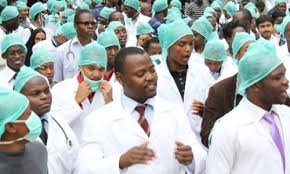 Francis Adedayo has been elected as the new President of the Nigerian Medical Association (NMA).

Mr Adebayo was elected on Sunday at the end of the association’s 58th Annual General Conference and Delegates Meeting held in Abuja.

Also elected into the National Officers Committee of the NMA to run the affairs of the association for the next two years were Kenneth Tijo, first Vice President and Ofem Enang, second Vice President.

In his acceptance remarks, Mr Adebayo said the new executives would deliver their duties with vigour and carry every member along in the running the affairs of the association.

“Every part of the health sector would be represented; we want to be fair and promote the profession, and also to see that our workers work well.

“We also want to sensitise the public on what NMA is doing so that they can support us as we need public support to move forward.”

The NMA president called on government to improve the work environment and upgrade the infrastructure in the health sector to meet international standard.

Share this on WhatsApp
Related Topics:Francis AdedayoNigerian Medical Association (NMA)
Up Next