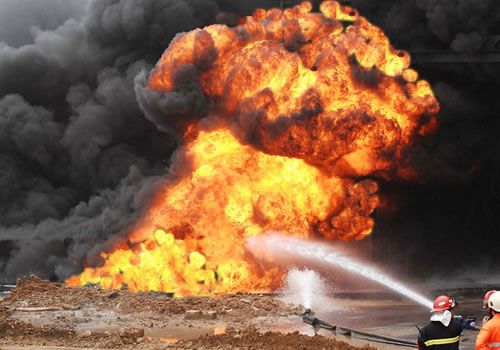 The Anambra Police Command said on Friday that eight persons died in Thursday’s explosion at a gas plant in Nnewi, near Awka.

The Police Public Relations Officer (PPRO), DSP Ali Okechukwu, told the News Agency of Nigeria (NAN) that two bodies, a mother and her baby, were later recovered at a nearby building.

Okechukwu also described as false the “alarming and misleading figure” of casualty put at over100 by the media.

“After the incident, six persons were confirmed dead outside the perimeter fencing of the company.

“Two other bodies of a woman and her child were later found dead in an adjourning building.

“Six other persons who were seriously injured were also rushed to the University Teaching Hospital Nnewi, and later referred to the hospital in Enugu,” Okechukwu said.

He explained that the fire might have occurred at the time when domestic gas was being dispensed to customers.

“I think there was disconnect which led to the explosion,” Okechukwu said.

He said investigation was still ongoing to ascertain the exact cause of the explosion.

He further explained that when the fire sparked-off from one of the nozzles, staff members and customers were advised to vacate the premises.

Okechukwu said that most of the casualties were motorcyclists and passersby who rushed to take a glance at the inferno before the explosion took place.

Also confirming the report, the Acting Director of the state Fire Service, Mr Innocent Mbonu, said although some nearby buildings were affected, six persons died before the service came.

“Tentative report says the fire, which was extinguished after a fierce battle, was caused by domestic gas explosion which distributed fire to some buildings around.

It could be recalled that the explosion affected the Inter Corp Oil Limited (LPG Gas Plant), a subsidiary of Chikason Group.

An eye witness said that the fire was caused by an explosion when a truck was discharging its contents.