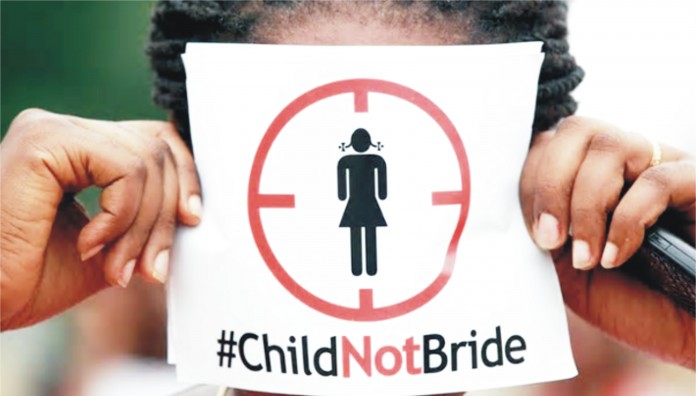 t isn’t easy being a girl child in Nigeria—with predators and paedophiles ever inspired to exploit their innocence. Tragic enough, the girls are yet to find protection in those reforms meant to shield them from the violations

UNICEF statistics reveals that 39  percent of Nigerian girls marry before the age of 18. Now that figure has just been spiked by 15-year-old Benue girl, Patience Paul who was abducted March 2 by two neighbours and married off to a certain ‘Sarkin Musulumi’ in far flung Sokoto State and Ese Rita Oruru, who has got a five months old pregnancy to show the world she indeed played the child bride in Kano State until 29 February, 2016 when IGP Solomon Arase secured her release from her abductor.

Ese was just a little over 13 years when she was lured to Kano in August 2015 by one Yunusa Dahiru, a tricycle operator living at Opolo, Yenegoa.

According to the Kindling Hope Across Nations Initiative, an NGO Ese’s parents initially reported the alleged abduction of their daughter to, the teenager was first converted to Islam, after which Yunusa got her hand in a nikhai.

As expected, the initial firestorm kindled by that abduction and sexual exploitation has lost steam with Ese back in Yenagoa. And as it was the case with the victims before her, she is now left alone to nurse the psychological torture and mental injuries of her abduction, rape and vandalization in the custody of the predator called Yunusa Yellow.

First it was Maimuna Abdulmumini who was just 13 when she was arrested in 2007 for allegedly roasting her 35-year-old husband to death.

The legal fireworks lingered over five years. Finally in 2012, when she turned 18, Maimuna was convicted of culpable homicide and sentenced to death. Today, despite an ECOWAS regional court ruling  in February 2014 that the sentence is a violation of her rights, she is still on death row, waiting in a dirty, cramped cell shared with six other inmates in a Katsina state prison.

Wasila Tasi’u too faced the threat of a death penalty for allegedly murdering her 35-year-old husband, Umar Sani, and three others at her own wedding party in April 2014.

Soon after she was arrested, Tasi’u narrated how she had been tied to the bed and raped by Sani on their wedding night. And when she appeared in Gezawa high court for the first time soon after her arrest, she could barely say her own name, turning her back to the court when the charges were being read, breaking down in tears.

She’s been freed now really, but not until she turned 15 behind bars in Gezawa, outside the city of Kano.

Never mind that the 2003 Child Rights Act says no person under 18 is capable of contracting a valid marriage, and a marriage so contracted is null and void. Or that marrying a minor, under the same Act, is a crime punishable by N500,000 or a 5-year prison term or both for anyone.

Those provisions only exist on paper, they hardly work in favour of hapless children like Maimuna and Wasila. And chances are that teenage girl Ese and others who share the same experience with her might never get true justice in the law court.

Yinusa already has a devil’s advocate in professor of Islamic Eschatology and Director of Muslim Rights Concern (MURIC), Ishaq Akintola, who was quick to submit that the Yunusa-Ese drama was a modern exemplar of the Romeo and Juliet affair.

“Yinusa is seen by many as the culprit in Ese’s predicament. Do you think he acted alone?”

“Ijaw youths are not looking at it from an objective angle. They are spoiling for war. All they see is a northerner that abducted their daughter. But is it abduction or elopement? Can we prevent a young boy and a young girl from falling in love with each other?’ the MURIC Director said in an interview granted the Punch Newspaper.

In his familiar sermon to Nigerians each time predators like Senator Ahmed Yerima snapped off a girl-child from her mother’s back for induction into a life of sex slavery, Akintola says:  “The simple truth is: Islam has no age barrier in marriage and Muslims have no apology for those who refuse to accept this…” In effect,  he fires at those who would make an issue over the ages of the babies who have been married off to their suitors under Islamic injunctions.

‘Islam is a complete way of life. As a religion, non-Muslims will have to take Muslims as they are, not as they want them to be. Neither Muslims nor their religion should be judged according to other standard.”

A Judiciary on Trial

The Professor of Islamic Eschatology and other parochial minds can afford to stand the law on its head and still claim to be right really. After all, Sharia law provides for ‘marriage of persons who have reached the age of puberty’. Even though lawyers and human rights advocates like Kemi Okenyodo of the Partners West Africa like to argue that ‘age of puberty’ is vague, especially in modern times  where girls menstruate from the age of 8-9 years.

“In the eyes of natural and common law, it  violates the rights of the person as she is still deemed to be a girl,’ Kemi Okenyodo laments.

Well if the noise making persists, which is very unlikely, Yinusa can count on some other warped minds to seize the stage and remind the public that Nigeria has three different legal systems operating simultaneously—civil, customary, and Islamic—and both the state and federal governments have control only over marriages that take place within the civil system. Not the nikkai which binds both Ese and Yinusa together.

It’s a dizzying jigsaw already, though not unsolvable says Kemi Okenyodo. According to her, Ese and her defence have got a lot to prove to nail Yinusa Dahiru.

“The criminality in this, is that, if it can be proved that Ese was “actually” abducted, then the matter comes within the purview of state which will be handled in a civil court.’

‘Secondly, if it can be proved that Ese was forced to convert to Islam and eventually forced to marry Yunusa, then the issue becomes a violation of her constitutional right to religion and dignity, because the constitution gives jurisdiction to the Sharia court to handle matters of marriage between “persons who are muslims”. Thus the issue of a forced conversion becomes a criminal matter that can only be handled by the high courts, and not Islamic law.”

The Burden of Proof

For a Yunusa who had once worked with Ese’s parents, Abdur-Rahman Ahmad, Chief Missioner of the Ansar-ud-Deen Society of Nigeria was so sure he told Faji FM 106.5 during an interview that what is being peddled as forced conversion to Islam and marriage was a consensual thing between Ese and Yunusa who are in love. Others in the cast of the Islamic cleric have also argued that Ese might have agreed to abscond with him knowing her parents may not approve of such a relationship.

It’s a perplexing quagmire really—especially with the teenage girl yet to give a testimony or make a deposition. But then, the concern is whether Ese’s evidence can be admitted in court knowing fully well she’s just a minor—at the mercy of foxy counsels who are adept at perfecting counter-motions and challenging court jurisdiction.

all these structural defects in our legal system, according to Adewale Adeduntan of the Christian Rural and Urban Association of Nigeria [CRUDAN],  provide leeway for unscrupulous offenders.

“The laws are there. They are enforceable! But, basically, the will power to bring offenders to book suffers setback because we have politicize and mortgage our existence on the altar of corruption, ethnicity, slow judicial process and  gratification,’ Adeduntan mourns.

Spare the CRUDAN South-West Zonal Facilitator if he sounds emotive really. The truth is that Nigeria’s constitution is far from being gender sensitive in the real sense of it. And that’s the reason a number of people hold the views that the laws are weak in terms of protecting the girl child.

“Our law books seem to be pro-male. Our laws seem to be indifferent to the sensitive needs of the female gender. If not, what do you make of the stringent terms and conditions that apply before cases of rape could be established let alone bringing offenders to justice?’ Adeduntan queried.

nonetheless, the Quran is clear about the obligations to be fulfilled before a marriage stands in Islam. And they are   Proposal and acceptance (al-Ijaab wa alqubuul), approval by both parents (ridaa alwaalidayn), payment of a dowry  by the groom (al-mihr) and the presence of at least two male  witnesses at the ceremony (shaahidayn ‘aadilayn).

Yinusa Dahiru obviously flunked the sharia matrimonial test—at least he did not get approval from Ese’s parents, neither did he pay a dime in dowry. Quite unlike his kinsman, Senator Ahmed Yerima who shot to infamy when he married a 13-year-old Egyptian girl as his fourth wife  in 2010 after reportedly paying a $100,000 dowry to her parents.

Well, the truth is that public outrage—such as the joint press conference addressed by Nobel Laureate, Wole Soyinka and activist Femi Falana [SAN]– inspired each time a girl child is abused in Nigeria is often momentary and brief. So it won’t be a shocker if the human rights community and those clamouring for justice in the Ese’s forced marriage go to sleep as usual or get caught up in another contrived social chaos.