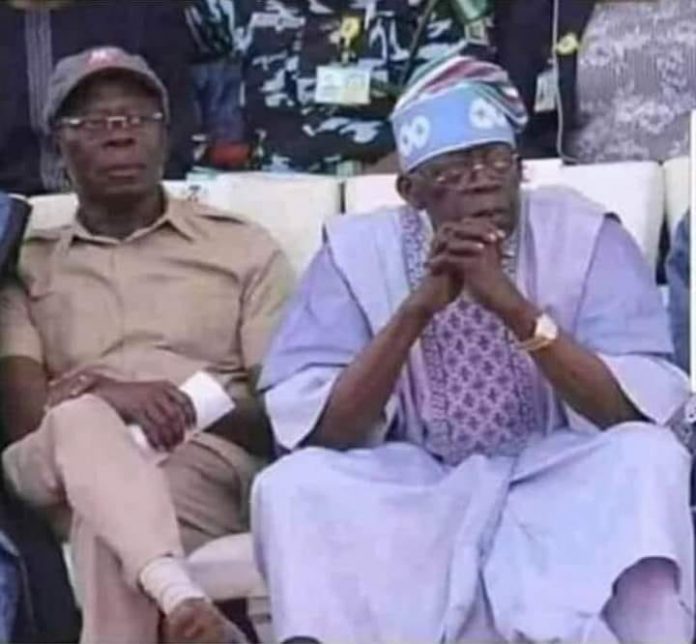 There are indications that Governor Godwin Obaseki of Edo State on winning the governorship election in the state on Sunday inflicted ‘pain of rigging’ elections on former national chairman of the All Progressives Congress (APC), Adams Oshiomhole, who had before the election transmuted to a seeming demi-gods or an impeccable deity.
Governor Obaseki resisted several temptations in the noticeable intransigent electioneering campaign between him, Oshiomhole and the APC candidate, Pastor Osagie Ize-Iyamu, to persuade the people of Edo State to renew his mandate for a new contract of governance.

Some stakeholders in the polity were of the view that the victory of Obaseki was a humiliating trouncing of Oshiomhole “who infamously postulated that for democracy to thrive, people must learn to accept the “pain of rigging”. They also argued that it was not just a victory over Ize-Iyamu, but also a drowning of the APC national leader, Asiwaju Bola Tinubu, who in a misconceived enthusiasm of the bound of his political domination, “made error-ridden broadcast before the election, telling the people of Edo State to reject Obaseki and vote for another slavish stooge he was propping up in cahoots with Oshiomhole.” They added that the people of Edo State for undermining the interference of the Lagos godfather, adhering strictly to the belief that “Edo is not Lagos.”

However, several other stakeholders were of the view that the threats of sanctions from the international community, particularly, the United States of America (US), the United Kingdom (UK), and the European Union (EU), remarkably mounted pressures on the election managers which include the INEC, the Nigeria Police and other security operatives to be cautious and eschew from either outright involvement or succumbing to inducement to rig the election.

There already exists visa ban on some politicians in the country identified as election riggers by the US government.

The UK and the EU subsequently issued threats of visa bans on election riggers in subsequent polls in Nigeria.

Nigerians still celebrate that the intervention of the international community has now become the hope for transparent elections in Nigeria.