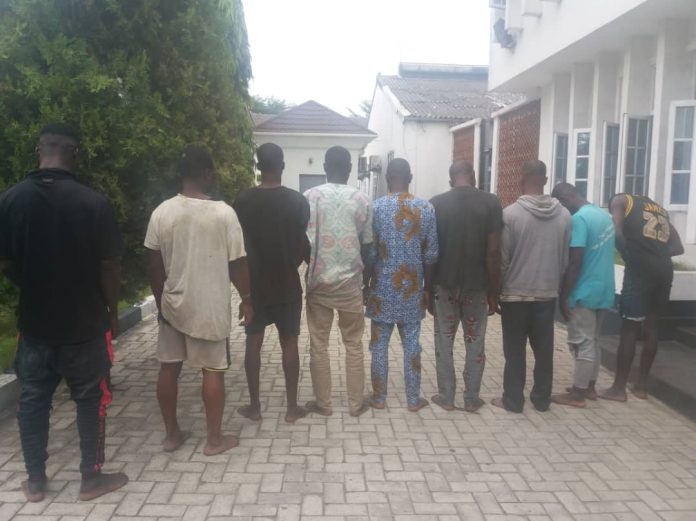 He said the arrest of the products, suspects, boats and the trucks happened between May 10 and 12 at Atlas Cove Island and Nigeria-Benin Republic Border .

” Although, no suspects were found at the scene, it is believed that the plastic cans were prepared for usage in storing illegally siphoned PMS from the Nigerian National Petroleum Corporation (NNPC) pipelines.

“In a separate incident on the same day, at about 5am , the patrol team also discovered another five trucks conveying about 70 x 25 Litre plastic cans around Abule Glass area on the Atlas Cove Island.

“It is opined that the vehicles were kept in preparation for the movement of stolen product from the NNPC pipelines.”

The Commander added that two boats and foreign nationals were also arrested by naval men on routine patrol along the Nigeria-Benin Boarder.

“On May 12 around 6pm , a naval boat on routine patrol along Nigeria-Benin Republic boarder intercepted two boats conveying a total of 85 x 250 Litre drums and another 150 X 25 Litre plastic cans suspected to be containing Premium Motor Spirit (PMS). This is believed to have been stolen from NNPC pipeline laid on the Atlas Cove Island.

“As at the time of the intercept, the two boats had a total of nine crew members comprising of one Ghanaian and eight Beninoise.

“Investigation into the matter is ongoing with the view to unravelling their local collaborators and accordingly, the vehicles and exhibits are in own custody and would be handed over to prosecuting agencies,” he said.

Shettima said the Atlas Cove Island accommodated a NNPC storage facility, which was operated and managed by the Pipelines and Product Marketing Company (PPMC) a subsidiary of NNPC.

The facility is designed as a transit depot to supply refined product to other NNPC depots at Mosimi, Ore, Ibadan and Shagamu areas. Over time, the facility is being threatened by activities of pipeline vandals and in a strive to check mate this ugly trend, the base heightened patrols on the island and its waterfront,” he said.

He said the act of illegally trading in petroleum product around the Atlas Cove Island was unfortunate, adding that most of the illegalities were perpetuated with the collaboration and assistance of some unpatriotic Nigerians.

“It is worthy of note that the navy under the leadership of the Chief of the Naval Staff, Vice Admiral Ibok-Ette Ibas is determined to rid our waterways and its connected creeks of all forms of criminality. NNS BEECROFT is therefore committed to assisting NNPC deal with the issue of petroleum product theft.

“The navy therefore uses this medium to warn oil thieves and other criminal elements particularly in our maritime environment to desist from these nefarious activities and pursue lawful means of livelihood,” he said.