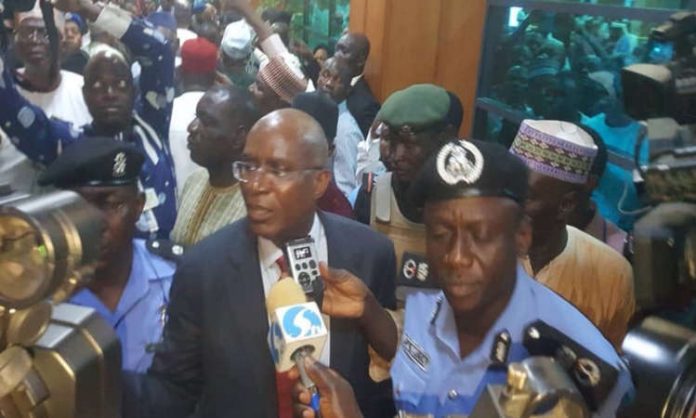 Security was on Monday beefed up at the National Assembly, Abuja, ahead of expected resumption of Senator Ovie Omo-Agege following Thursday’s Abuja High Court nullification of his suspension by the Senate.

Strengthening of security arrangement at the complex, especially around the Senate Chambers is to forestall likely security breach as recorded on April 18, when some hoodlums stormed the chambers and made away with the Mace.

The incident which occurred while plenary was ongoing in the chambers was linked to Mr Omo-Agege, the Delta Central senator, who defied the suspension order on him and attended the proceedings, accompanied by some strange fellows into the chamber.

Apart from full security detail in the red chamber on Monday, police officers were seen at the lobby leading into the chamber, a development that is unusual on a non-sitting day.

Sergeants-at-Arms were also seen in clusters discussing in hush tones, and apparently perfecting the security beef-up.

Some staff of the assembly, who pleaded anonymity, told NAN that the development was not unconnected with the expected return of Mr Omo-Agege to the chamber on Tuesday after the court judgment in his favour.

They confirmed that the move to check likely break down of law and order as experienced when the mace was forcefully taken away.

Mr Omo-Agege had gone to court to challenge his 90 legislative days suspension by the Senate and the court in its ruling declared the action unconstitutional, saying that the Senate could not suspend a member beyond 12 days.

His suspension was based on is comment that amendment to section 25 of the Electoral Act, 2010 (as amended), bordering on reordering of elections sequence was targeted at President Muhammadu Buhari.