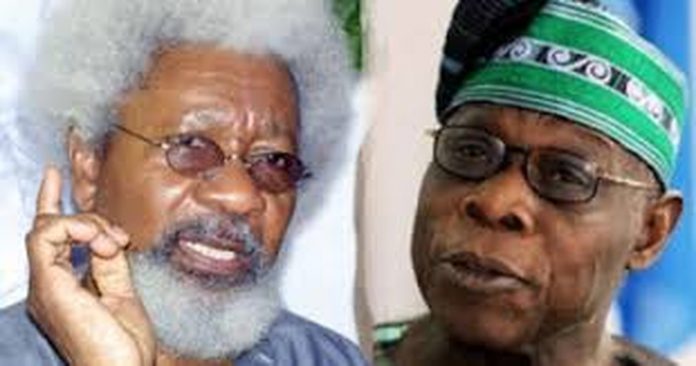 While former president and most travelled Afrocrat Olusegun Obasanjo comes across as a chronic letter writer on ego trip to some, others take him as a true conscience of Nigeria in the APC administration.

So in times like this the rank of Obasanjo’s admirers can’t help swelling. And one big fan is just added: Nobel Laureate Professor Wole Soyinka.

The former president warned Nigeria is heading in the direction of Rwanda—and that an uprising against the Fulani is not impossible.

Buhari, the National Daily reported, dismissed the letter as unpatriotic,  focusing only on isolated incidents.

But Soyinka, speaking with the Daily Sun, said Obasanjo can’t do no wrong with that letter. Likewise the outcry of the former governor of old Kaduna State, Balarabe Musa.

“When voices as ideologically separated as Obasanjo and Balarabe Musa harp on the same theme, government should understand that this is not the time to play deaf,” he said.

Soyinka also agreed that Nigeria is hurting like never before in its history.

“It’s a time for unprecedented approaches. The call for a national conference is not new; it is, however, taking on an accelerated urgency that no one should ignore,” he said.

Before now, Soyinka always criticized Obasanjo for still hogging the limelight, especially with his the Coalition for Nigeria Movement, years after leaving office. The professor even wrote a book slagging off the former president.

And Obasanjo, in his litany of books, has always poked at Soyinka, who is also a fixture in the history of Nigeria.