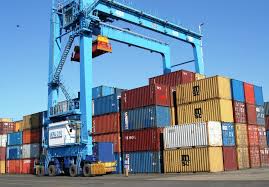 THERE were tensions inside the Tin Can Island Port recently as the Lagos State Government made an attempt to start collection of its controversial Wharf Landing Fee inside the port terminal but the officials were rebuffed by angry freight forwarders who drove them out of the port.

Sources at the port confirmed to National Daily correspondent that the Wharf Landing Fee collecting authority had engaged dockworkers to help them in collecting the fee inside port terminal even before the trucks move out of the port.

Wharf Landing fees Law No. 5 of 2009 was introduced during the regime of Babatunde Raji Fashola to empower the Lagos State Government to collect various  sums of money as fees from goods that land at the Lagos Ports of Apapa and Tin Can Island port.

This collection also has the backing of the President General of Maritime Workers Union of Nigeria, Comrade Adewale Adeyanju who confirmed that the union has signed an agreement with the Lagos State Government with a promise to help them collect the Wharf landing Fee, stressing that the move is to further put direction in collection of the fee and to improve revenue for the union as well.

Adeyanju told our correspondent that with the union involvement, collecting officials of the fee would not be seen on the road but the fee would be collected inside the terminals.

However, some angry freight forwarders who spoke to this writer expressed disagreement that the Lagos State government cannot be allowed to collect any fees inside the terminals stressing that there were too many government agencies inside the ports.

The Lagos State Government wants to engage the dock workers to help them in collecting of the Wharf Landing Fee.

Adeyanju affirmed that it has been in existence since the existence of Governor Fashola but now we as Maritime Workers Union of Nigeria are partnering with them on revenue generation. Some companies even pay in bulk to the Wharf Landing in order not to disrupt their trucks on the road.

The Lagos State Government does not have the right to enter inside the terminal, they should go back to the road side where they have been collecting it before.

“We sent them away. The dock workers are not up to us in number but it is our leaders that are not encouraging us to carry out confrontation – the fee is not paid by them – we are the ones paying it.”