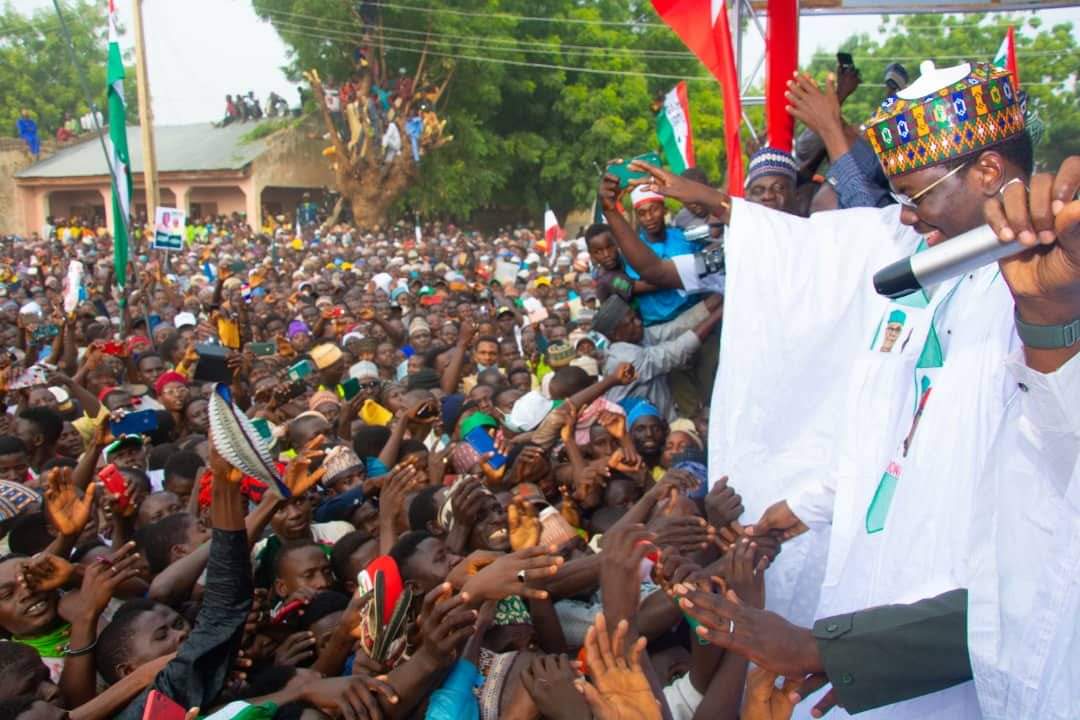 Dauda Lawal, a Governorship candidate of the Peoples Democratic Party (PDP), on Monday, held Gusau, the capital of Zamfara State to a standstill as thousands of his supporters defied security threats to attend his mega rally.

Lawal held the maiden rally after an Appeal Court in Sokoto reinstated him as the PDP governorship candidate, following the nullification of his primary election by a High Court in Gusau.

Thousands of the PDP supporters, from virtually all the 14 Local Government areas of the APC-controlled State thronged Gusau to express their support to the party’s flagbearer.

It was observed that Gusau wore a new look on Monday following the huge crowd of the PDP faithful that graced the rally.

Business activities had been paralysed in Gusau as the crowd caused traffic gridlock around the city, especially on the roads leading to the venue of the rally.

Addressing the mammoth crowd when he arrived at the venue in an open van, the PDP candidate promised to restore peace in the state ravaged by the activities of bandits.

He also pledged to improve the economy, education, health and agriculture in the state.

According to him, Zamfara needs robust and effective leadership to be revived, especially with the current insecurity bedevilling the state, noting that only PDP has the wherewithal to achieve that.

“Today is a historic day. Today true democracy is being played. We are overwhelmed by this massive crowd. This shows that the people of Zamfara are ready and want change.

“We will not let you down. We will not disappoint you. You know we impacted your life even when we are out in power. If you elect us, we will do better.

“If you elect me as your governor, I will ensure security is restored in our dear state. We have mechanisms and strategies to achieve that. I will improve security, health, economy and agriculture, the glory of our state. We will restore our farming activities by God’s grace,” Lawal said.

Some of the PDP faithful who spoke to journalists said they would vote for Lawal because of his resolve to help the poor and the vulnerable.

They said the candidate had impacted the lives of many of the people of Zamfara, especially the downtrodden.

“This man has never been in power but he is doing what even the government is not doing. He helps orphans, widows, physically challenged, and executes many projects in communities.

“This man has offered scholarships to hundreds of students, offered empowerment to women and youths, no wonder you see this massive crowd,” said Adamu Nuhu, a PDP supporter.

2023 election is about candidates not political parties – Dalung